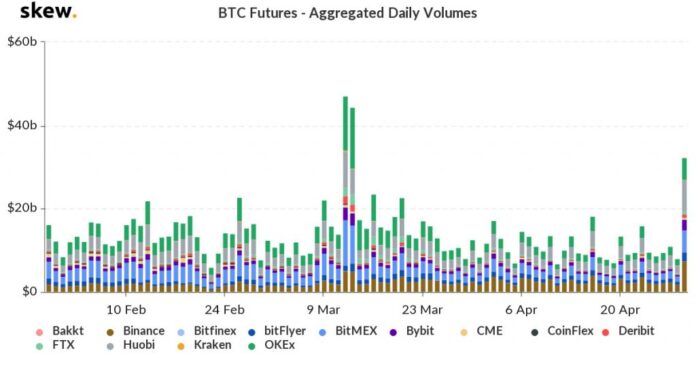 Bitcoin’s surpassing $ 9000 has stimulated the futures market considerably. Contract transactions with the date of 29 April have exceeded 30 billion dollars in total.

Bitcoin futures market almost jumped yesterday. The tremendous rise in volume was associated with Bitcoin’s positive price movement of over $ 9000.

According to Skew, which provides data on crypto money markets; Contract transactions with a maturity of 29 April exceeded $ 30 billion in total. This figure corresponds to roughly 40 percent of the $ 50 billion volume experienced in the major market decline, including the Bitcoin price, on March 12.

Binance, Huobi and Bitfinex have the highest share
Cryptocurrency exchanges Bitfinex, Binance and Huobi were the companies with the highest share in this volume. Only the volume among themselves was up to $ 23.2 billion. BitMEX, once the undisputed leader in the futures market, saw only $ 5.3 billion in volume on Black Thursday.

Woman with “the smallest waist in the world”

Chris Evans: I Already Miss The Role Of Captain America

Some features of Samsung Galaxy S20 will come to Galaxy S10...