Bitcoin (BTC) daily trading volume surged to over $ 3 billion in the first week of November. In addition, Bitcoin futures have also climbed in CME.

Bitcoin transaction volume saw a decline in the past October. However, with the BTC price exceeding 15 thousand dollars, the transaction volume has increased in both futures markets and spot markets. Daily trading volume for Bitcoin on the 7-day chart has increased by 270% since November 3, according to data provided by Arcane Research. With this climb, the daily BTC volume has exceeded 3 billion dollars and the record for 2020 was broken.

Arcane Research, which measures “real” Bitcoin volume according to its own statements, is measuring Bitcoin trade volume by compiling data from LMAX Digital, an institution-focused cryptocurrency exchange, and 10 other exchanges. According to market experts, the increasing volume reveals that the interest in Bitcoin remains strong.

Open positions for Bitcoin are climbing on CME

In addition to reaching the highest levels of the year in trading volume for Bitcoin, there is also an increase in Bitcoin transactions on CME, one of the world’s largest futures trading platforms, which also offer futures for BTC.

For Bitcoin, the number of open positions in CME has risen by 169% compared to last week. The total value of open positions on the stock exchange is currently over $ 900 million, which is close to the year’s record value of $ 948 million recorded in August.

Again, according to Arcane Research data, the number of large investors holding more than 5 options contracts worth at least 25 BTC in CME is also on the rise. While this number was approximately 40 at the beginning of 2020, it more than doubled to 99.

See Also
The Likelihood of Bitcoin Going to $ 20K Doubled 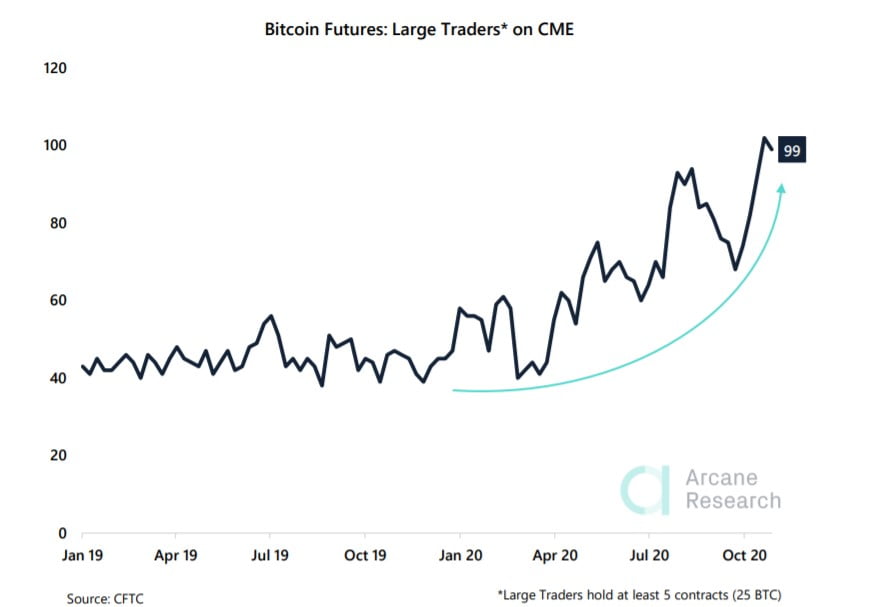 The Lord of the Rings: Gollum presents its world details

Will New Furya Be Unique Tokens After DeFi Frenzy?