For years, cryptocurrency investors and market followers have feared that Bitcoin could be targeted as a threat by traditional market authorities. But, according to analysts, this is not possible until the Bitcoin price exceeds $ 250,000.

Despite the adoption rates and increasing performance of Bitcoin, these values ​​are not enough for BTC to be seen as a macro level threat. DTAP Capital and Gold Bullion Int. Co-founder and longtime Bitcoin supporter Dan Tapiero said that for Bitcoin to be perceived as a threat on a large scale, the BTC price should be $ 250,000, or the market value of 5 trillion.

Tapiero, responding to the statements made by Chiprex CEO Eric Lombrozo on social media for Bitcoin, “If an alternative money was encouraged against traditional currencies in the past, they would try to get rid of you somehow”, Tapiero argued that this idea was wrong.

Bitcoin Is Too Small To Be A Threat To Global Powers

Dan Tapiero said that a $ 200 billion market value for macro authorities is a very small amount, adding that although the market value of gold is 12 trillion, nobody cares. Tapiero commented that for Bitcoin to be considered important by global authorities, it must be at least $ 250,000. 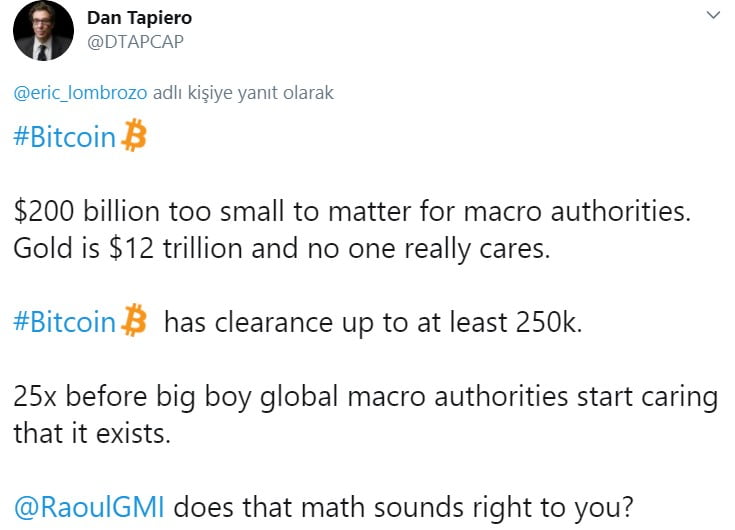 Raoul Pal, former director of Goldman Sachs and CEO of Real Vision, also made a statement supporting Tapiero and stated that Bitcoin is now at an unrelated point to the global scale. Pal joined Tapiero, saying that even a $ 10 trillion market capitalization does not concern most central banks. Pal underlined that the FX market has made more than 1 quadrillion transactions in a year, half of which are made in DTCC.

Both Dan Tapiero and Raoul Pal are firm Bitcoin supporters against their statements. Both people believe that in the long run, the price of Bitcoin can rise above $ 100,000. The statements made by the two are not that they do not believe in Bitcoin; it is interpreted realistically as revealing the current market situation.

The Last of US 2 multiplayer mode and first images