According to Mike McGlone, a senior strategist at Bloomberg, the uptrend is getting stronger with the deterioration of the positive correlation of Bitcoin and Nasdaq. The separation for technology stocks and BTC has been drawing attention especially in the last 5 weeks.

Mike McGlone of Bloomberg Intelligence said that he has strengthened the foundations of Bitcoin on the way to rise with a post he shared on Twitter. According to senior commodity strategist McGlone, the fit between Bitcoin and stocks of US tech companies has diverged. Mcglone suggested that this divergence could be a bullish sign for Bitcoin.

Separation of Bitcoin and Nasdaw 100 benefits the leader coin

Mike McGlone backed up his claims with a chart he shared on his Twitter account. McGlone said the fundamentals have improved over the Nasdaq for Bitcoin to gain more value. Bloomberg strategist stated that the harmony between BTC and Nasdaq 100 ends, along with the fundamental and technical factors that support Bitcoin.

According to the chart shared by Mike McGlone, it is observed that Bitcoin has shown a clear upward trend in dollar terms compared to the Nasdaq 100, which has declined in the last 5 weeks.

How has Nasdaq and Bitcoin changed in 2020?

In the first quarter of 2020, with the impact of the global pandemic, the Nasdaq 100 soared and Apple and Microsoft took back trillion-dollar market dominance. Meanwhile, leaving home bans around the world put oil on Alphabet (Google) and Amazon’s bread. Overall, the Nasdaq 100 increased by 41.22% from early 2020 to September.

Bitcoin, which is seen as a technology asset not listed on Wall Street indices, rose to almost $ 16,000 earlier this month, valuing 121.36% this year. Thus, with a market value of about $ 200 billion, Bitcoin even surpassed the $ 186 billion PayPal Inc. 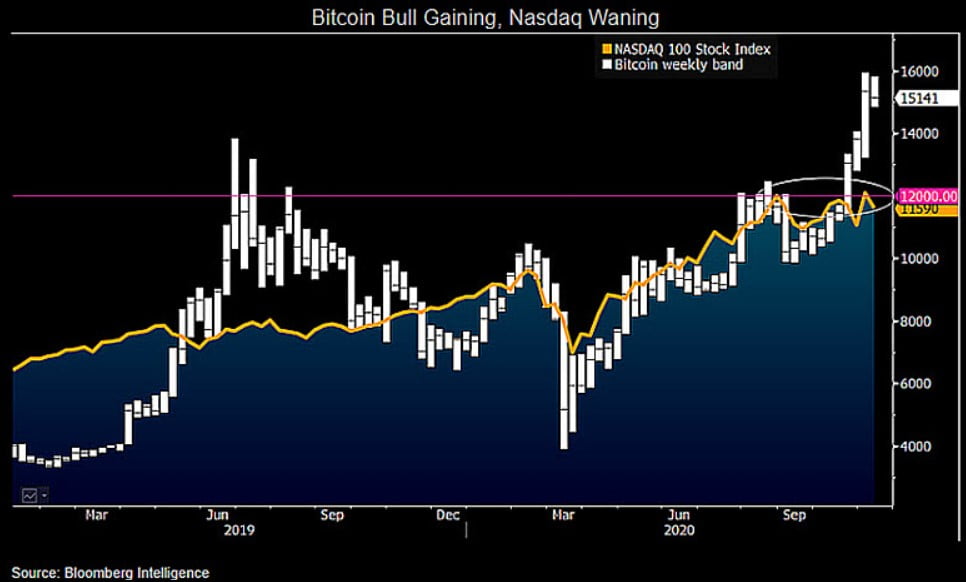 With many factors such as the delay in the US aid package and the news of the COVID-19 vaccine, the Nasdaq 100 recently experienced a correction. Bitcoin, on the other hand, faced a decline at first, but it managed to maintain its place with a strong upward reaction immediately after. BTC quickly shrugged off the impact of the vaccine news, increased by more than 3% in the last 24 hours and re-increased its price to the 15,800 – 15,900 band.

Call of Duty 2020: revealing the date of its new debut

When is the PSG – Bayern Munich match, what time