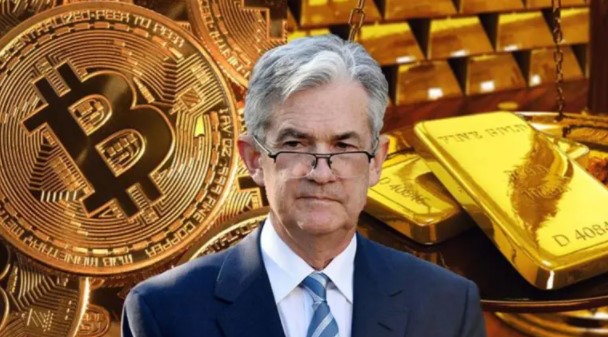 With US inflation at a 40-year high, the Federal Reserve’s priority is to avoid ‘established’ and ‘self-sustaining’ inflation. But President Jerome Powell said on Thursday that Russia’s invasion of Ukraine and new sanctions could have “unintended consequences”. The Fed Chairman’s speech affected the price of Bitcoin and gold.

“We will see upward pressure on inflation for a while”

Jerome Powell told the Senate Banking Committee that this is something the Fed is watching very carefully. “Everything is very uncertain. We don’t want to add to the ambiguity. At times like these, we act with caution,” said Powell, confirming that he plans to support the traditional 25 basis point increase at the FOMC meeting on March 15-16. Fed officials will also draft a plan to shrink the central bank’s balance sheet by nearly $9 trillion.

However, a major concern entering the spring is the ‘unintended consequences’ of sanctions against Russia and the war in Ukraine. With the Russian invasion of Ukraine, oil prices exceeded $100 per barrel, reaching a long-term high with commodities. Jerome Powell noted that this could have an impact on inflation expectations and growth. The Fed Chairman continued his statements as follows:

What we know so far is that commodity prices, especially energy prices, have increased significantly. This will work its way through the US economy. We will see upward pressure on inflation, at least for a while. We don’t know how long this will take. Also, we can see that risk sensitivity has decreased. We can see lower investment, people are pulling back on their spending. It’s hard to see what the impact will be on both supply and demand. I would like to reiterate that we need to be alert and agile when making decisions in a rather difficult environment.

However, Jerome Powell warned that the most important thing in this situation is how persistent the increases in commodity prices are. He noted that any long-term oil shock could filter out inflation and affect economic growth. Jerome Powell used the following statements:

Oil prices have risen significantly from where they have been for two months, and this will be reflected in gasoline and other fuel prices. And this will manifest itself in higher inflation. Typically, with an oil surge, prices rise and either stay at that level or fall. This contributes to the price level in both cases, but not to inflation. On the other hand, there is already a lot of upward inflationary pressure. And the additional inflation pressure puts it on the margin, possibly increasing the risk that inflation expectations will start to react negatively to control inflation.

Despite these concerns, Jerome Powell reiterated that it is important for the Fed to continue tightening, given the tight labor market and hot inflation, and underlined the following concerns:

It is appropriate that we continue on the line we had in mind before the invasion of Ukraine took place. We do not want inflation to settle down and continue on its own. We will continue to increase interest rates.

Under the influence of Jerome Powell’s speech, gold prices reversed their daily losses. At the time of writing, spot gold prices were up 0.24% at $1,933.2, while US gold futures were up 0.76% at $1,936.9. The Fed Chairman’s statements were not received positively by the crypto market. Leading Crypto Bitcoin has lost about 3% in the last 24 hours, falling to $ 42,378.

Both Dogecoin and Elon Musk are silent: What is the direction...

StrikeX Is The First ‘Space-Launched Cryptocurrency