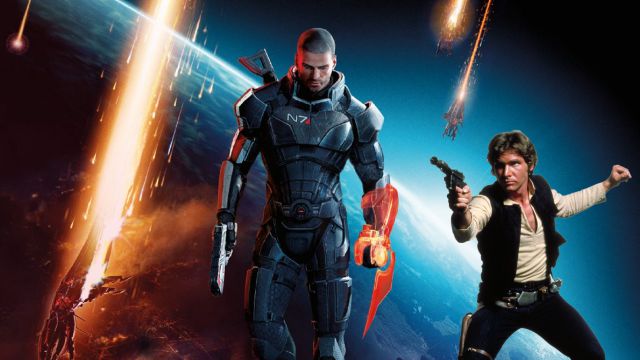 The game was intended to expand the universe of the saga while continuing to develop the next products of the main trilogy.

After a while fallow, BioWare’s galactic saga will return to stores with Mass Effect Legendary Edition, a remastering of the original trilogy. Meanwhile, the Canadian studio continues to work on the brand’s next great game, announced during The Game Awards 2020 gala. In the drawers, however, there remains a project that never saw the light of day, a spin -off from Mass Effect inspired by the character of Han Solo.

The information is published by The Gamer, who had the opportunity to chat with Dorian Kieken, former director of development at the time. “We explored a game concept way back in 2008, shortly after we released [the first] Mass Effect,” he notes. The idea was that “you will play as a character like Han Solo in a game inspired by Star Control, but within the Mass Effect universe.” The idea was to “expand the universe” and develop it “in parallel” with the trilogy.

A Mass Effect from a different perspective

“I like the idea of ​​exploring a grayer character, similar to the smuggler or pirate guy from the Mass Effect universe,” he continues. “This also allows us to view the world from a different point of view than the chosen supersoldier. It’s like exploring the Star Wars universe without being a Jedi or the Warhammer universe without embodying a space marine. ”

For Kieken, having a character more diffuse in character and not associated with a major group of pirates allows you to explore the universe in a way that the savior of the galaxy cannot. “Think of the narrative freedom that they have in series like The Mandalorian or Firefly thanks to the mercenaries or the smuggling characters.”

This title, which began to be outlined between the development of Mass Effect and Mass Effect 2, could not be addressed due to lack of time. “We all needed to focus on Mass Effect 2, which was the right decision at the time. Still, I think the concept was very strong, so I would like to see a game like that one day. “