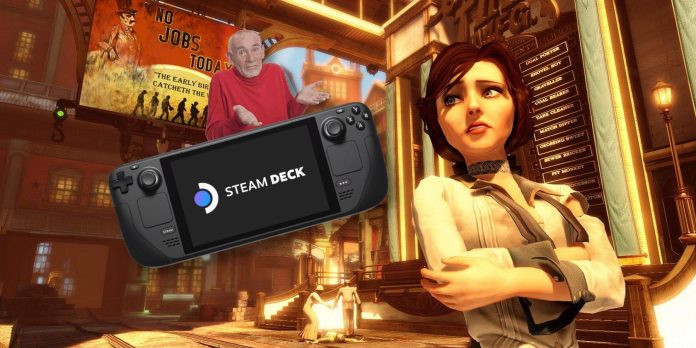 A recent update has been released for all three BioShock games, but those who have games on Valve’s Steam Deck device are a little upset about the patch that improves the quality of life. Considering that the first game in the series is considered one of the best FPS games ever made, it’s understandable that some will be concerned about this latest update, and it’s apparently related to the Linux operating system.

For those who don’t know, Steam Deck uses Proton, the Linux version. Up until this latest patch, users could enjoy deck games seemingly without problems, but the new 2K launcher added to the patch seems to be causing problems. It also seems to affect those who use Linux on a home PC.

A recent PC Gamer report quoted a Reddit post complaining that BioShock releases are now “broken” on portable PCs. Although, according to the patch notes, there are only two major updates, namely: binding to a 2K account has been implemented and games are now launched through the publisher’s launcher, a number of Steam Deck users have found that they cannot play any of the games, especially because of the operating system that the device uses. Some have contacted Steam to express their concern that they are unable to launch any BioShock release since the update was released. Hopefully, 2K Games will see the problems that many are registering and release a fix for them.

Since its release in February, Steam Deck has become a very popular mobile device. Although it was initially advertised as a competitor to the Nintendo Switch, it has since become a more portable PC. Of course, most people will use it for games, and it is the ability to play games from the Steam user library that is the main advantage of the device. However, it is also compatible with a USB keyboard and mouse, and some have even used this device to program simple games.

As for the 2K/Irrational games themselves, a BioShock adaptation for Netflix is currently in development, and the Hunger Games director Francis Lawrence has joined the project. Unfortunately, many Linux users are currently unable to play these favorite FPS games. In particular, the first record is perhaps the most famous of all three, but it’s frustrating that they all suddenly stop working after the so-called quality of life update came out.

A new BioShock game is in development.