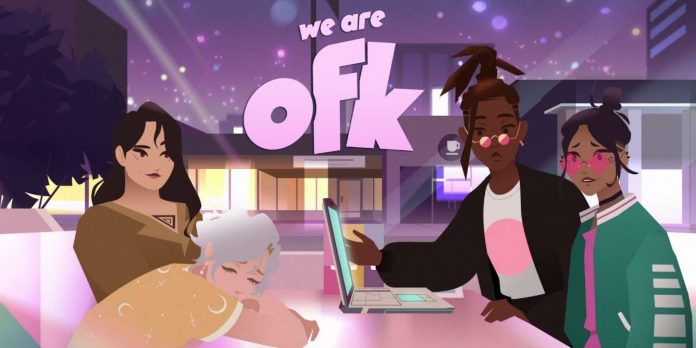 We Are OFK has been one of the standout upcoming indie games since its presentation at The Game Awards in 2020. The game is positioned as a biographical story of the fictional pop group OFK, which is gaining popularity and overcoming personal difficulties, creating their debut EP. Almost two years after the announcement of the music video game We Are OFK is finally preparing for its debut as an episodic release, which will take place on August 18.

We Are OFK is one of the most recent examples of combining storytelling in a game with its marketing, as the game was originally presented at The Game Awards 2020 with a performance by its titular virtual band. Since then, he has appeared at numerous events, such as Sony’s State of Play and Nintendo’s Indie World demonstrations, with teasers about the lives and relationships of the characters to be featured in the game, as well as teasers through music releases such as the band’s debut. The song “Follow/Refuse.”

Last month, the development team of Team OFK confirmed that the development of the game has been completed, and also announced that an announcement of the release date will soon follow. Today, the developer announced that the game will debut on August 18 as an episodic release, while each new episode will be released weekly along with a new single that will be available for digital streaming, adding to the ranks of other video game soundtracks on the services. like a Spotify. Eventually, five episodes will be correlated with 5 tracks to create the band’s debut EP.

The game is about a group of four friends who are trying to balance their relationship problems and busy lives by establishing themselves on the Los Angeles music scene and eventually releasing their debut EP. Episodes of the game are described on the game’s Steam page as part of an “interactive animated series” and five interactive music videos. The game also features voice acting of characters such as Ally Maki (Toy Story 4), Shihaya Aviel (Circle), Greg Chun (Justice), Yuri Lowenthal (Marvel Spider-Man) and Kimberly Brooks (Mass Effect).

Physical pre-orders for We Are OFK are already available on iam8bit for the PS5 and Nintendo Switch versions, due out in the third quarter of 2022. Along with them there is a double vinyl soundtrack for both the EP and the game soundtrack, which will be delivered in the first quarter. 2023. It is not yet known at what price the episodes of the game will be launched, but the full physical version on iam8bit currently costs $ 29.99. The game is also available to add to the wishlist in the PlayStation Store, Steam and Nintendo eShop.

The first episode of We Are OFK will be released on Nintendo Switch, PC, PS4 and PS5 on August 18.

Will the legacy of Hogwarts be postponed?