Binance has announced that it will list the Oasis Network token ROSE, and said users can make transactions with ROSE instantly. It is stated that among the pairs to be listed are ROSE / BTC, ROSE / BUSD and ROSE / USDT. The listing fee for the new token is 0 BNB. So what is the Oasis Network announced by Binance, how does it work? Let’s examine it.

The Oasis Foundation announced the launch of the Oasis Network mainnet on Twitter. This new protocol, which is ambitious about privacy and scalability; It is a blockchain-based decentralized protocol with over 70 independent validators. Stating that the upgrade took place at 16:00 UTC on November 18, Oasis stated that the transfer of the ROSE token was activated and staking operations were initiated.

Aiming to revolutionize DeFi, Oasis shared in blog posts that they are based on privacy and scalability. 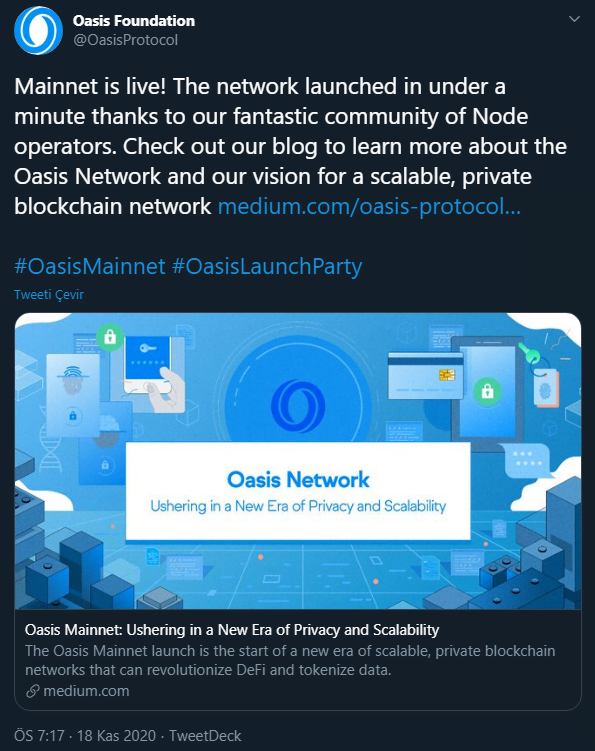 How does Oasis Network work?

The Oasis network is a scalable, private network and has a unique architecture. The design of the network, which has two main layers, Consensus and ParaTime, supports multiple uses.

Oasis Network; CryptoSafe Alliance – Binance develops joint projects with many big companies such as Nebula Genomics, Balancer, Meter. It is stated that there are many validators, applications and partnerships on the network, and the global participation is also stated to be quite high. Oasis Network has over 100 ambassadors. These ambassadors from Turkey, China, France, Brazil, India, Korea, Vietnam, are showing participation in the Oasis network from countries such as Russia.

In addition, it is stated that more than 25 universities and communities in 5 continents run Oasis Network nodes, so it is the largest blockchain-based university program.

ETH ParaTime support is also among those transferred on the network. Oasis-Eth is fully compatible with Ethereum, but it is a faster and more economical layer than ETH. It also supports all DApps on the Ethereum network that will and will be built. The approval process is only 6 seconds.

One of the main goals of Oasis Network is to prioritize privacy. For this, it is stated that a special privacy support is provided, in which the data processed by the nodes in the network is encrypted. This privacy support, which is stated to be located in the ParaTime layer of the network, enables the applications created in the layer to fully benefit from the features and advantages of the blockchain network. Oasis also states that those who want to make transactions with this privacy support can visit their website and apply.

About the ROSE token

Oasis said the ROSE token will be used for all transactions on the network. Emphasizing the importance it attaches to privacy, Oasis announced that they preferred the “rose” symbol because it symbolizes privacy and reflects their visions exactly.

Referring to a number of problems in DeFi networks such as high fees, identity and operational problems, Oasis states that Oasis Network will be the solution to these problems. With their easy, scalable and user-friendly design, they aim to allow users to operate comfortably. It is also stated that Meter, Balancer, Chainlink and many more DeFi projects have joined the Oasis ecosystem.

Samsung is said to simplify box contents after Apple

5G Alert from Huawei to UK

An Apple Music feature was added to Spotify after 2 years

IBM Has A New Patent Based On Blockchain