Binance listed the factors that could raise the Bitcoin price in a blog post. According to Binance, the US dollar, which fell due to the coronavirus epidemic, the contraction in the economy and the uncertainty of the US economy stimulus package, was the main factor that directed investors to Bitcoin.

Cryptocurrency markets have been hit hard after the recent declines of Bitcoin and ETH. But despite the weakness in the market, investors have had the opportunity to make a profit, and the demand for altcoins has increased, according to the analysis of cryptocurrency exchange Binance. Especially Uniswap (UNI) made a positive impact on the market by gaining more than 1000% value on Binance. The volume of futures on the Binance exchange exceeded $ 176 billion, supporting the positive mood. Because Bitcoin has a very low volatility, investors have tended to increase the number of open positions in altcoins.

Bitcoin fell 7.5% in September, while Ethereum fell 17%. The downward price volatility in the cryptocurrency markets was experienced after the retreats seen in the global stock market and especially below. Following the coronavirus pandemic, the contraction of the economy and the uncertainties about the US economy stimulus package, the US dollar managed to increase its performance. Due to the wave of uncertainty surrounding the global economy, investors turned their eyes to dollars again.

As the indicators give positive signals for Bitcoin in the medium term, it is seen that investors are not much affected by the recent market declines. Buying opportunities may arise for investors as corrections are inevitably seen in the bull markets. For example, when the 2017 bull market was seen, the Bitcoin price lost more than 30%. However, with this depreciation, the upward trend also increased and the opportunity to buy was born. As a result, Bitcoin had risen to an all-time high of $ 20,000. According to Binance analysis, it may be possible to experience a similar situation.

The Basic Element Shaping Bitcoin is the US Dollar

The US dollar was the most important factor in keeping Bitcoin performing well in 2020. With the selling pressure on the dollar, investors turned to safe investments, turning to alternative assets such as Bitcoin. The correction in the exchanges also affected Bitcoin, lowering the BTC price by 18% and bringing it to the level of $ 9,800. BTC futures on Binance declined from 12% to -0.1% on a 3-month basis. Investors’ desire to hedge is cited as the reason for the sharp decline in Binance.

Tokens on DeFi platforms, which have been developing rapidly, were affected by panic sales, and experienced a big decline in September. For example, SushiSwap (SUSHI) lost more than 70% of its value, while Chainlink (LINK) dropped over 30% in September. Other poor performing DeFi tokens include LEND (27%), MKR (16%) and COMP (45%). Prior to the heavy sales on the platform, the Total Value Locked (TVL) value of the platform’s DeFi protocols exceeded $ 9 billion on September 2. The reason for this was the increasing liquidity in traditional stock markets and an uncertain rise seen in Sushiswap. When the withdrawals began in the crypto exchanges, the TVL value of the smart contracts on DeFi platforms also declined from $ 9.7 billion to $ 7.7 billion. Investors who gained their confidence in the sector managed to increase the value of TVL to over $ 11 billion by starting to make transactions again. 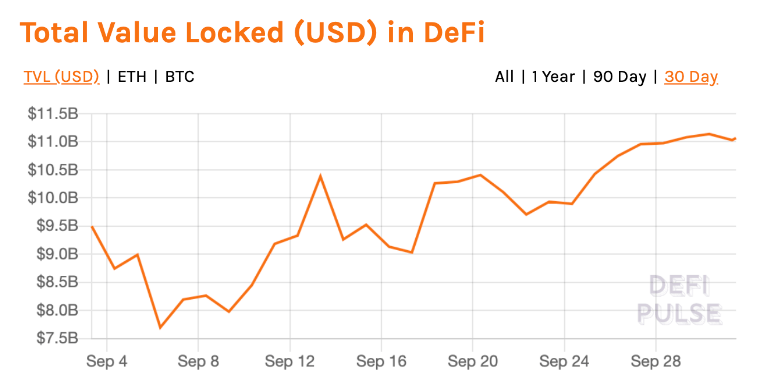 Binance continued its efforts to increase financial asset diversity for investors, despite the weakness in the markets, and became one of the first exchanges to list Uniswap (UNI) tokens. Binance Futures is one of the major exchanges currently listing popular tokens such as UNI, LINK, DOT. This contributed to Binance maintaining and growing its earnings regardless of market conditions. Binance says that as a result, investors will always be able to seize trading opportunities on Binance.

Binance’s market share has increased from 29.5% to 31.2% since August. Considering the low volatility seen in the crypto money market recently, it can be said that Binance has shown a good success. Daily trading volume on Binance Futures was over $ 5.7 billion during the month of September. The number of open positions on the platform also followed the upward trend. In addition, BTC futures, which took place on Binance in September, have a transaction volume of over $ 176 billion.

Open positions on Binance have been reviewed by Binance to examine the sensitivity of investors. Bitcoin open positions fell from 53% to 42% in September. The decrease here also supports the decrease seen in the transaction volume. As a result, it is an indication that investors are increasing open positions mostly in altcoins and chasing altcoins with low value.

Many analysts are optimistic for the cryptocurrency market in the medium to long term. According to Binance, investors should continue to follow macroeconomic data while following the trend direction of Bitcoin. It was stated that the US dollar is the biggest driving factor that raises Bitcoin, and attention should be paid to the performance of the dollar. At the same time, a weakness or selling pressure in the dollar could trigger a new buying wave for assets like Bitcoin, calling the bulls on the scene.

ARMY celebrates the anniversary of the Epiphany

Billie Eilish Online concert, what you need to know

Bitcoin Price Could Be 720 Thousand Dollars