Home Celebrity Billie Eilish once appeared in THIS special episode of The Simpsons. 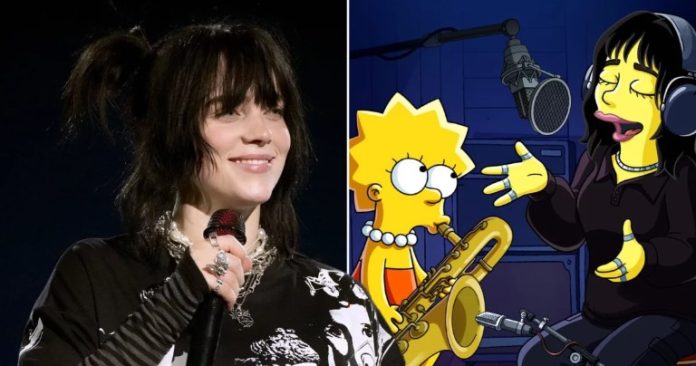 Billie Eilish was once part of The Simpsons. This year, the young singer set a record by winning several Grammy Awards. She found her breakthrough at a rather tender age with hits such as Ocean Eyes and a song from the James Bond film No Time to Die. But the singer is multifaceted.

She is known for her unique and almost angelic voice. But the singer, known for her rather gloomy songs, always wanted people to know that she was a bright, cheerful person. So when it was announced that her guest would appear in The Simpsons, everyone, including her, was excited.

What role did Billie Eilish play in The Simpsons?

Billie Eilish surprised everyone with her appearance as a guest. She appeared in The Simpsons short films on Disney+. The shorts were supposed to be like mini-movies, and this one was called “When Billie Met Lisa.” The episode aired on the channel in April of this year.

In this episode, she plays herself, which opens up great opportunities for Lisa Simpson. It is known how much Lisa loves music and playing the saxophone. Her talent is discovered by Eilish’s siblings when they invite her to the studio. The award-winning singer recorded her version of the Simpsons theme song for a short episode.

These specials are made with an emphasis on any of the main characters from the Simpsons family. Previous short episodes were Maggie Simpson in “The Force Awakens from a Dream” and “The Good One”, “Bart”, “Loki”. The Simpsons in Pulaversary, the last of which was released on November 12. Despite the fact that the series received average ratings, it was very liked by fans of the show and the performer.

Previously, celebrities such as Stephen Hawking, Leonard Nimoy, Johnny Cash and others also appeared in the show. Although the Grammy Award winner is one of the most successful and youngest to achieve such success. A feather in the hat for this year’s achievements.

If you’ve seen this episode, what do you think of it? Let us know in the comments.

7 Suga photos that you can easily recreate at home