Home Celebrity BILLIE EILISH FACES HER ME FROM THE PAST 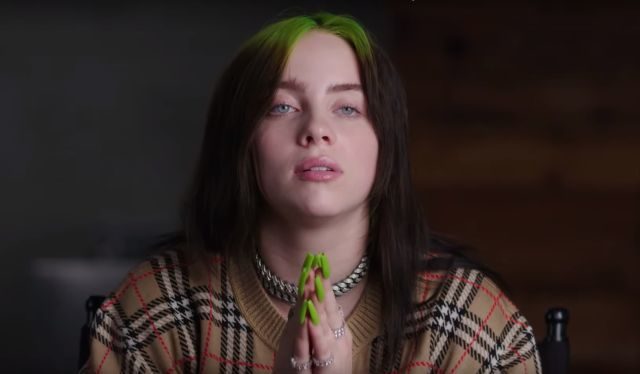 Vanity Fair magazine has repeated the same interview with Billie Eilish for the third consecutive year. The American soloist has thus faced her self of the past by answering the same questions she already faced in 2017 and 2018.

It all started on October 18, 2017 when a very young Billie Eilish sat in front of the cameras of the popular fashion and entertainment magazine. At that time the singer was already a viral phenomenon after triumphing with Ocean eyes and sweeping her EP Don’t smile at me. All that with 15 years and despite their responses already showed a commendation worthy of maturity when facing such thorny issues as fame (he has talked about the episode of the theft of his ring), the presence of the media, the relationship with your family or your musical future.

Both in the interviews of 2018 and the current one of 2019, the artist continues to demonstrate her continuous evolution and despite agreeing on some of the answers about her position regarding the music that she would like to compose in the future or her cinematographic tastes and fashion; in other matters it differs completely from its past self.

That is the case of the artists with whom he would like to collaborate, confessing that singing along with someone on stage is too complicated or that the music industry is full of artists who are sad or frustrated.

But perhaps one of the most surprising statements he has made in this interview refers to his album When we fall asleep, where do we go? Her record debut was released on March 29, 2019 and was a great relief for her to judge by her words.

Asked about her most important thing at this time, she replied that “thank God I finished the album because I was about to jump out of a building for finishing that fucking * disk. It was exhausting. Thank God I finished it. Honestly, now that I think about it , sometimes I talk to Finneas and we ask each other if we realize that we have really finished that record. I swear to God we thought we would never finish it. ”

Billie Eilish’s audiovisual report for Vanity Fair is a real wonder whose viewing is forced beyond whether or not you like the music of the performer. Quiet if you go a little weak English because you can activate the subtitles option. VF have thought of everything …