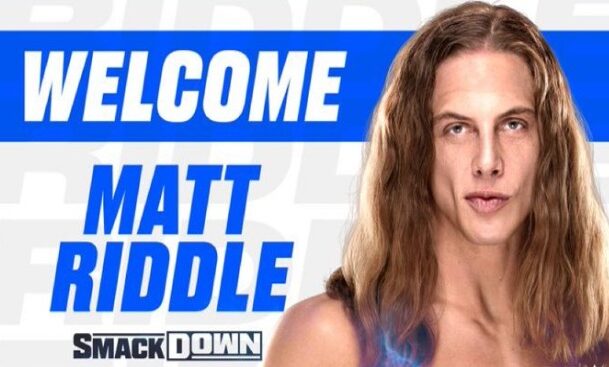 As could be seen last night, WWE would have high expectations for the promotion of Matt Riddle on SmackDown

In the latest SmackDown broadcast, WWE announced that Matt Riddle would be the newest acquisition of the blue brand. Most strikingly, he was inducted as one of the company’s new faces by Hall of Famer Kurt Angle. Followed by a promotion on Riddle. According to WrestlingInc, WWE officials would have a good regard for Matt Riddle for a boost on the main roster.

According to the Wrestlevotes account, the company officials have high expectations about the future of the fighter in blue territory.

There’s no word yet on when Riddle will make his official debut. But the same could take place next week on SmackDown. Nothing has been confirmed yet, but it is known that the fighter was filming the promotion that aired last night.

The end of Riddle’s journey came last Wednesday at the NXT show. When he fell defeated to Timothy Thatcher. The fight was carried out in a steel cage. And he even had the presence of Kurt Angle as special referee of the contest.

Matt Riddle signed a contract with WWE last August 2018 after an interesting step through the independent scene and MMA. Which included a UFC tour. In the yellow mark the fighter became one of the great sensations of the development territory with great support from fans. He was the NXT tag team champion alongside Pete Dunne. He also highlights his surprise entry in the last edition of Royal Rumble and his participation in the NXT team in Survivor Series 2019.

Moon and Mars: how to observe the combination of stars