Home Entertainment Big Hero 6: 10 methods that can potentially be implemented in the... 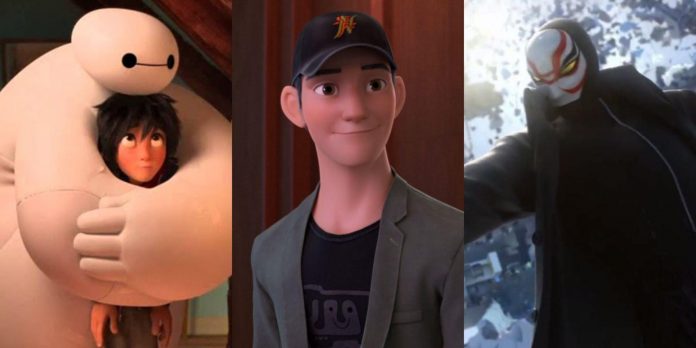 Baymax recently hit Disney+, an original series based on the titular robot from Big Hero 6. While both projects are hugely successful animated productions from Walt Disney Animation Studios, the origins of the team and superhero characters can be traced back to Marvel Comics. The film itself even boasts a Stan Lee cameo to confirm this link.

While rumors circulated a while back that the team could be introduced into the Marvel Cinematic Universe, this still hasn’t been fully confirmed. The popularity of the animated universe cannot be denied though and with Baymax landing with audiences, there possibly could be a live-action connection one day. If so, these are some possible scenarios as to how that could happen.

Avengers: Age Of Ultron saw Tony Stark look through his previous A.I. to replace Jarvis after the Vision transformation. While Friday was the option he chose and Jocasta could be seen in the background, there was also one other option available to the inventor.

Whether he gained it from a friend, or perhaps he had created it himself, one of the A.I. chips was titled Tadashi. In Big Hero 6, it’s Tadashi, Hiro’s older brother, that creates the Baymax A.I. in the first place. Perhaps it’s one of Stark’s archives that begins the process of bringing the team to the MCU.

The Characters Already Exist In The MCU

Playing off of the idea that it’s Stark that has set the team in motion with the creation of Baymax, it’s plausible that all of the members of the group are already a part of the MCU. Most notably, perhaps they attend MIT, where Stark was a major influence.

That would explain the Tadashi robot chip; it might be a project from one of the students. The continuity wouldn’t have to be affected, and fans could just enjoy the fact that the team is already starting to get to grips with their superhero origins, in a unique story separate from the animated feature.

A natural assumption is that a version of the Big Hero 6 team is out there in the Multiverse. There may be an Earth somewhere which boasts San Fransokyo, the home of Hiro and the group. The recent foray into the wider realms of reality would lend itself to this theory.

Shows like Loki are going to continue to explore the various timelines that are out there. It’s not out of the question for one universe to only have this one superhero team. A quick cameo would be all it would take for Disney fans and lovers of the animated movie to be pleased with the inclusion.

The MCU has already played around with the idea that there are animated worlds and live-action worlds. What If…? continues to explore the animated aspects of the Multiverse. This could be the way to connect fans to the animated film with an animated series.

It’s plausible that Disney simply doesn’t want to change anything and instead, it would be the Marvel characters that enter Baymax’s universe, rather than the other way around. That could be a fun opportunity to see some of the MCU’s most famous characters in an animated format like this.

The Original Version Of The Team

The version of the team that comic book fans would be familiar with is vastly different from what appeared in the animated form. So that it could appeal to kids more, many of the adult elements of the source material were stripped away, in favor of fun original components like Baymax’s redesign.

However, if the MCU wants to introduce the idea of the team, without pulling directly from the movies, then they could look back at the early comics and include the versions of the characters that fit closely with the Marvel brand. It would be fun to see a reimagining; the kind of realistic edge that early concept art would have showcased.

A Film Within The MCU

Other movie franchises have been shown to exist in the Marvel Cinematic Universe, so it’s possible that Big Hero 6 could as well. It’s interesting because Disney has occasionally referenced some of its productions within their work before, but Big Hero 6 would be the most meta inclusion yet.

As an extension of this, the group could also exist in a comic book form, as a fictional team that kids love to read about. It might provide an opportunity for Marvel Studios to explore how superhero mythology is understood by the general public.

Group Of The Far Future

Time travel has become a huge part of the Marvel Universe and now plays into the larger Multiverse as well. In the main Earth-616 timeline, is it plausible that eventually, San Fransokoyo exists in its own right, just in the far-off future.

RELATED: 5 Friendships That Would Work (& 5 That Wouldn’t) If Big Hero 6 Met The Incredibles

The Future Avengers is the kind of team fans might expect far down the timeline, but if any Marvel character manages to see what’s to come for the superhero community, they might just find the Big Hero 6 themselves, defending the Earth from threats the Avengers once bested.

An Original Group Of Pre-Existing Characters

The Big Hero 6 team could exist in the MCU, but not in the way fans would expect. Marvel could opt to create their original version of the team, based on various scientists and other characters that already have been established. It would step away from the lore of the animated film and comics.

Darcy Lewis is a great example. She can provide the technical know-how and the hilarious moments that fit with the animated movie. But she could also suit up as a hero like Honey Lemon, utilizing the skills she has previously learned throughout her many adventures.

The most likely narrative that the Multiverse phase of the MCU is heading for is that of Secret Wars. Fans can assume that all kinds of cameos will be taking place, as every reality collides on a battlefield that rivals the war against Thanos. Big Hero 6 could be included in the mix.

It would be a surprise inclusion to see these kids brought into live-action to take part in some kind of war. While there is a risk that they would be overshadowed by other potential cameos from past Marvel movies, it would still be a fun way to nod to the Disney production.

If Marvel is looking for a way to test whether Big Hero 6 works in live-action, then they could begin with a Disney+ show. There are plenty of approaches, including a meta attempt for the heroes of the animated movie to turn themselves into live-action characters.

Regardless of how it’s achieved, by establishing the concept separately in a live-action setting, it would be a lot easier to then see the group as part of the wider MCU down the line. There are risks to be had if there were to be a live-action unit, as they might not live up to the original. But the quirky team should be given the chance.

Naughty Dog will be working multiplayer on PS5

Euphoria: HBO speaks out against the harsh accusations it was receiving...