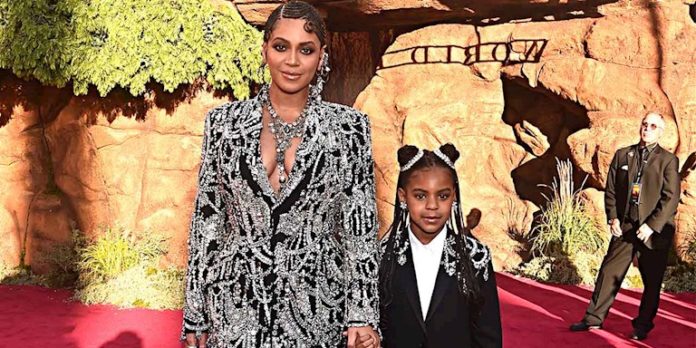 Beyoncé always remains as close to her daughter Blue Ivy. She is also the spitting image of her mother when she was a child!

Beyoncé did celebrate the New Year with the family. The 37-year-old star also surrounded himself with his friends for this occasion. The singer Megan Thee Stallion, known for having worked with big names in the hip-hop scene like Drake or French Montana, was present. Besides, the latter made her fans crazy in love thanks to her last post with Queen B and her daughter Blue Ivy.

Indeed, the young woman decided to share her meeting with Beyoncé. The two young women seem to get along well. They appear more accomplices than ever on social networks. Queen B wears a pretty little party hat. However, another person seems to be drawing the attention of internet users. It’s Blue Ivy. Beyoncé’s daughter has changed a lot in the past few years. Besides, she will soon celebrate her 8th birthday on January 7.

BEYONCÉ AND BLUE IVY IN COMMON TRAITS
Beyoncé was therefore well stolen the show by Blue Ivy. Indeed, in the last shots posted on Instagram, she sports a new look. The little girl has straightened her hair and she has a radiant smile. However, some compare her to her mother when she was a child. The resemblance is striking and no one can deny it!

Beyoncé is proud of her daughter. She does not hesitate to include Blue Ivy in each project as in Homecoming, the documentary broadcast on Netflix in 2019. In addition, she appears in the Spirit clip from the soundtrack of the film The Lion King. However, 2020 risks being a busy year for the singer. Indeed, she is preparing to release her brand new Ivy Park collection with the brand Adidas. Nevertheless, the fans are impatient and we understand why. For the time being, she is enjoying her family, her husband and 3 children Blue Ivy and the twins Sir and Rumi.