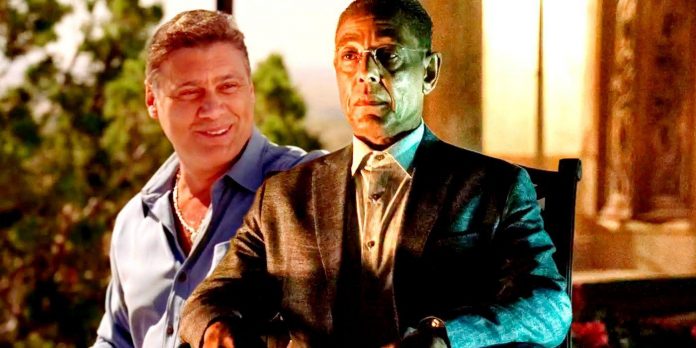 The massacre of the cartel, arranged by Gus Fring, represents a significant moment in the series “Breaking Bad”. “Better Call Saul” shows how things could have developed differently. In the 4th season of the TV series “Breaking Bad” “Salud” Gustavo Fring organizes a gangster masterstroke by poisoning Don Eladio in his own house along with all his high-ranking capos. This power play ends Fring’s long-standing plan to take full control of regional methamphetamine operations while simultaneously avenging his beloved, who was killed by the Eladio cartel two decades ago.

In season 6 of Better Call Saul, the last season of the prequel set four years before Breaking Bad, Giancarlo Esposito’s character is still kneeling before Don Eladio, feigning loyalty and biding his time with the utmost patience. Any steps Gus Fring takes against the cartel in this era (for example, the murder of Lalo Salamanca) must be carried out in absolute secrecy to avoid Eladio’s suspicions, approaching that fateful day in season 4 of Breaking Bad, when the checkmate can finally be announced.

Fring and Eladio’s working relationship has become increasingly fragile over the years, and Gus is getting bolder, but Don treats this subversive activity as if Gus is a child testing the boundaries of his parents, admitting in Breaking Bad: “I should have spanked you… 20 years, you forget your place”. Season 6 “Better Call Saul”, episode 9 (“Fun and Games”) goes much further, showing that Eladio really knew that Gus harbored a burning, intense hatred for him. After their meeting with Salamanca , Eladio says: “When I looked into your eyes… I hate it.” If Don had known how Gus felt, he could (and probably should) have done something about it, either by being more careful with his bespectacled employee, or by killing Fring as soon as he was out of action in Breaking Bad. Eladio knew Gus was holding a grudge. He knew that their enmity was personal, and not just the result of Gus’ excessive ambition. If Eladio had used this knowledge, the massacre in the TV series “Breaking Bad” in “Salud” would never have happened.

Why did Eladio let Gus live (despite knowing the truth)?

The last conversation between Gus Fring and Don Eladio helps explain why the cartel leader didn’t roast his Chicken Man as soon as he looked into those piercing eyes and saw that hatred was burning inside. Speaking about why he forced Gus to give Jesse Pinkman, Eladio says: “There is no place for emotions in this. You should understand better than anyone. Business is business.” Don is sure that Gus is a man who appreciates the classic gangster mantra “business, not personal”. In other words, as long as things are going well between Eladio and Gus Fring, personal grievances will be put aside. In fairness to Eladio, Gus adheres to this rule 99% of the time, performing a methamphetamine operation with a clinical lack of emotion. It’s easy to see why Don assumes Gus prefers the mind over the heart. In truth, he had woefully underestimated the depth of Fring’s latent anger.

You don’t need to be a psychologist to see that Don Eladio considers himself untouchable. The gangster has remained unpunished for so long that he simply cannot realize the possibility of his own downfall. When he warns Gus, “It’s okay to hate a little bit, provided you never forget who’s boss in the house,” Eladio treats Gus like an unruly dog. The animal, of course, wants to bite him, but it is safe on a leash. Once again, Eladio’s self-confidence makes him misjudge the seriousness of the threat Gustavo poses.

Eladio also misses out on Gus Fring’s hatred because Chicken Man is a useful asset-a mistake repeated by many others in Breaking Bad and Better Call Saul. Gus earns money from his cartel’s employer-more than Salamanca. Killing him would be a bad thing, despite the hatred in those cold eyes. Ironically, this is exactly the same mistake that Gus himself makes with Walter White. Gus knew how Walt felt about him, but ignored the opportunity to quell this threat because Heisenberg was too valuable to lose. Such pride leads to his death… as well as to Don Eladio.

Mickey Guyton reveals how her son Grayson inspired her to use...