Home Entertainment “Better call Saul” connects the scene of season 5 with the TV... 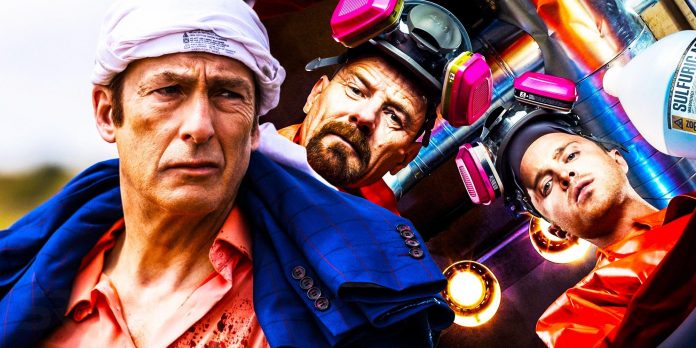 “Better Call Saul” just retroactively made the Season 5 episode super-virtual for Walter White and Jesse Pinkman in Breaking Bad. When “Better Call Saul” is almost over, “Breaking Bad” can no longer be watched as before. Repeat viewing sessions will inevitably present Saul Goodman, Gus Fring, Mike Ehrmantraut and even Spudge in a completely different light. However, as the finale approaches, “Better Call Saul” makes even more direct changes to its parent series, as in the 11th episode of the 6th season, Walt and Jesse kidnap Saul from the 2nd season of the series “Breaking Bad”.

This time, viewers see Saul in a sack screaming in a van before arriving at a pre-made grave in the desert that Walt and Jesse dug to intimidate him. When the lawyer lies face down in a panic among round-bottomed flasks and methylamine, assuming that his kidnappers must be cartel members, he feels the car pull off the road and shouts: “Whatever it is, can we please not do this in the desert? but the desert!” Although Saul has more experience with gangsters than most, this is still clearly a strange request. Your typical kidnapping victim will scream “please don’t kill me” rather than “if you’re GOING to kill me, can we do it somewhere else?” Why is Saul so determined to avoid the desert in the crossover “Better Call Saul” from the TV series “Breaking Bad”?

Saul’s phrase “anywhere but in the desert” is a subtle brilliant reference to the series “Better call Saul” season 5 “Bagman”, which is considered one of the greatest episodes of the spin-off. Jimmy heads to the desert and collects Lalo Salamanca’s bail, but he is quickly attacked by Juan Bolsa’s thugs, who prefer Lalo to stay in prison. Although Jimmy survives thanks to Mike, his car crashes in a shootout. What follows is a difficult, near-fatal nighttime trek across miles of desert that involves drinking urine and picking up dropped cash bills by bill. “Bagman” was a traumatic experience for Jimmy, and Walt and Jesse’s request not to drive him into the desert shows how traumatized the lawyer is by this experience, even in Breaking Bad. The plea “anywhere but in the desert” helps to link “Better Call Saul” and “Breaking Bad” together, strengthening continuity by scattering links in the right places.

When the second season of Breaking Bad first aired, Saul Goodman believed that Lalo had sent his kidnappers. Then “Better Call Saul” continued and explained who “Lalo” was and why he might be a little annoyed by his former lawyer. By the time Breaking Bad comes out, Saul knows that Lalo has been dead for four years. However, since the evil Salamanca has already risen from the grave once, Saul has a small fear in his heart that Lalo will return. This definitely explains Walt and Jesse’s question “Did Lalo send you?” in Breaking Bad.

In the 11th episode of season 6, “Better Call Saul”, the lingering trauma of Saul Goodman is revealed more deeply when Jesse Pinkman innocently asks who Lalo really is. After a while, Saul replies, “It’s nobody,” but his expression says a lot— as if a person who has just woken up from a nightmare is going through the worst night of his life. Saul Goodman tragically spends the rest of his days staring at the grinning face of Lalo Salamanca peeking around every corner.

Interestingly, Jesse has no idea who Lalo Salamanca is, despite the fact that he has already been in the methamphetamine game when Breaking Bad begins. Jesse’s ignorance proves how far the Salamanca family has fallen after Gus Fring got rid of Lalo, but it may also be related to Jesse’s low status in the Albuquerque underworld, since he only vaguely knows about the “high-level ice man” Tuco Salamanca in the season of “Breaking Bad”. 1. Nevertheless, the fact that Lalo Salamanca did not become a legendary name among the criminal community, but was remembered only by the victims who escaped from him, like Saul, makes his death in season 6 “Better Call Saul” even more gloomy.

The most underrated images of the slimmed-down star of the 90-day...