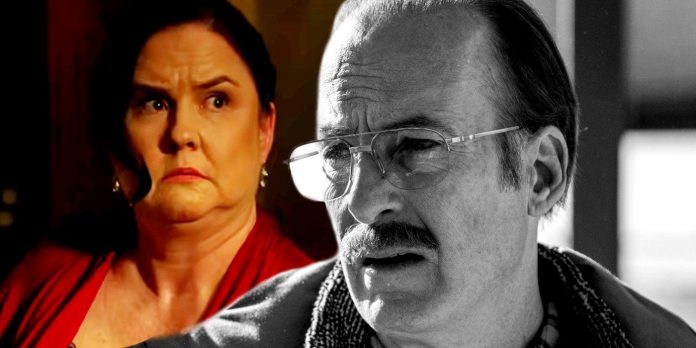 Better call Saul masterfully played a long game with a phone call from Francesca and Gene — here is a small detail that marked the beginning of their verbal reunion. Flirting with “Breaking Bad” since 2015, “Better Call Saul” finally goes all the way in season 6, episode 11. The episode titled “Breaking Bad” (of course it is) finally brings both shows together. One timeline explores the events of Breaking Bad from an alternative perspective, the other continues the future misadventures of Gene Takavich. So far, Gene’s timeline has barely mentioned Walter White and Jesse Pinkman, but season 6 of “Better Call Saul” breaks that wall when Gene talks on the phone with his former assistant, Francesca Liddy from Tina Parker.

Saul Goodman arranged this phone call to get an idea of the post-Heisenberg situation about six months after leaving Albuquerque, hoping to hear how much dirt the Drug Enforcement Administration knows, how many assaulted him and what became of their accomplices. Francesca tells him about Skyler White’s deal, Jesse’s car found, and Huell’s escape from the safe house, and also describes in detail how each bank account was discovered. The “Better Call Saul” conversation between Gene and Francesca is crucial to the Breaking Bad finale, connecting many misunderstandings as well as determining Gene’s future, but the scene was artfully created four years ago, in September 2018…

The episode “Better Call Saul” season 4 “Happy Trip” began in flash forward, which takes place shortly before Saul Goodman’s escape from Albuquerque, when Francesca helps her boss destroy stacks of documents while the Drug Enforcement Administration is approaching. Before they part ways, Saul asks rhetorically, “Where are you? will it be November 12 at 15:00?” Francesca assures him that she will be “there”, but will leave if the phone does not ring at exactly 3 o’clock. Nothing more has been said about this, and nothing has been said since. The phone call in the 11th episode of season 6, “Better Call Saul,” is payback. Apparently, Saul had pre-selected a remote pay phone, deposited some cash nearby, and then gave Francesca the details. On the appointed day, they both follow the plan.

Better Call Saul Francesca’s Payout is Even Better Than Expected

In season four’s “Better Call Saul,” Gene and Francesca’s phone conversation consists of three phrases uttered in less than 10 seconds, and takes place amid a frenzied flurry of seemingly more important details as Saul Goodman prepares to escape. While there is undoubtedly an omen, nothing in this scene suggested that Francesca’s phone call would prove critical to the very fabric of the Breaking Bad universe. Based on Bob Odenkirk and Tina Parker’s understated delivery, most expected the call to be about something minor, like sending extra money or checking to see if Francesca screamed.

Gene and Francesca’s phone call actually represents a seismic shift in the franchise. The conversation adds the finishing touch to El Camino, showing that the Drug Enforcement Administration is looking for Jesse Pinkman in the wrong place, and another to Breaking Bad, revealing that Anna Gunn’s Skyler White took the plea deal offered by Walt. There are plenty of other character fates provided, including “Better Call Saul” and “Breaking Bad,” and these references perfectly hold both timelines together after five seasons of Gene Takavich’s relative silence.

Instead of focusing solely on the past, Francesca creates Gene’s future by revealing that Kim Wexler called her. This racy passage sends Jin on a darker path when he calls Kim, fails, and then embarks on a new crime. His decision is heard throughout the 11th episode of the 6th season “Better call Saul” and is likely to further affect the two remaining parts. It’s no exaggeration to say that Francesca’s phone call represents the end of the “Breaking Bad” era and a springboard for the grand finale of “Better Call Saul.” Not bad for an almost fleeting line of dialogue…

You will get weirder things than on Tinder: New date sim...

Jett: The Far Shore Invites Us To Visit An Unknown Planet...