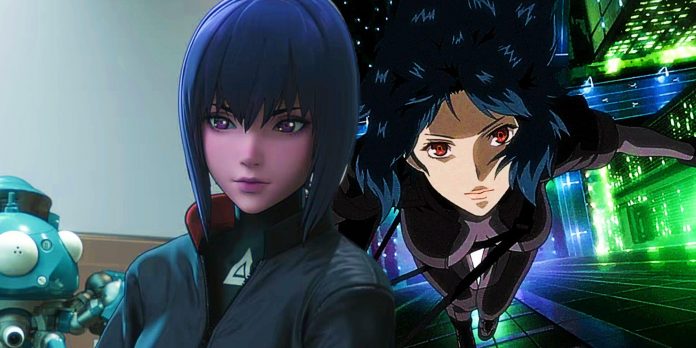 The Ghost in the Shell franchise has existed for decades in many different media and formats – here is the best order to watch all Ghost in the Shell movies and TV shows. In 1989, a serialized manga series by Masamune Shirow would introduce Major Motoko Kusanagi and the techno dystopian world that would remain relevant for years to come. Following the manga, Ghost in the Shell was adapted into animated movies, animated TV series, video games, and even a live-action theatrical film.

Despite all the adaptations, Ghost in the Shell’s impact on pop culture comes mostly from the 1995 Ghost in the Shell movie by Mamoru Oshii. The classic animated feature combined elements from different sci-fi inspirations, such as Ridley Scott’s Blade Runner, with the characters and the setting from the manga, and it added a level of philosophical discussion that was not so present in the original work. Although no other entry in the Ghost in the Shell franchise managed to be as impactful as the 1995 film, each of the following movies and shows expanded the franchise in a different way and added more nuances to the story of Major Kusanagi and the Section 9.

Related: Every Ghost In The Shell Movie, Ranked From Worst To Best

Between the several movies, TV shows, OVAs, and compilations, there is no correct order to watch Ghost in the Shell. That is because there are at least three different continuities, with events that do not necessarily connect and sometimes even contradict that of the other universes. However, there is a logical Ghost in the Shell watch order that can make the experience much better. The original Ghost in the Shell movie is by far the best starting point, as the quality of the film makes up for the initially quite complicated story. That can be followed by the direct sequel Ghost In The Shell 2: Innoncence (2004), and from then on, the view can dive deep into the animated series and the straight-to-home video films. Here is a breakdown of the best Ghost in the Shell watch order.

The original Ghost in the Shell movie places the audience in a dystopian world in which the characters’ alignments, origins, and motives can be hard to follow. The Mamoru Oshii film obviously could not count on the footnotes commentary that Masamune Shirow used in the manga, and it went instead for a very defined “show, don’t tell” approach with scenes that go on for minutes without any significant dialogue. That said, the initial difficulty in following The Major’s story in Ghost in the Shell is not enough not to recommend the film as someone’s first and best contact with the saga. Not only was Ghost in the Shell (1995) the first adaptation of the manga but it also remains as the best entry in the Ghost in the Shell franchise to this day. It beautifully introduces the viewer to the franchise’s dystopian cyberpunk world, and it sets the tone for everything that would come later in the Ghost in the Shell franchise. It is also important to notice that the 2017 live-action Ghost in the Shell movie starring Scarlett Johansson as the Major and Pilou Asbæk as Batou is mostly a remake of the 1995 film. Likewise, 2009’s Ghost in the Shell 2.0 is a reproduction of the 1995 film with updated animation techniques and the addition of 3D elements.

The Good Doctor: Antonia Thomas Does Not Return for Season 5

NCT Dream is ready for his comeback and Mark will be...