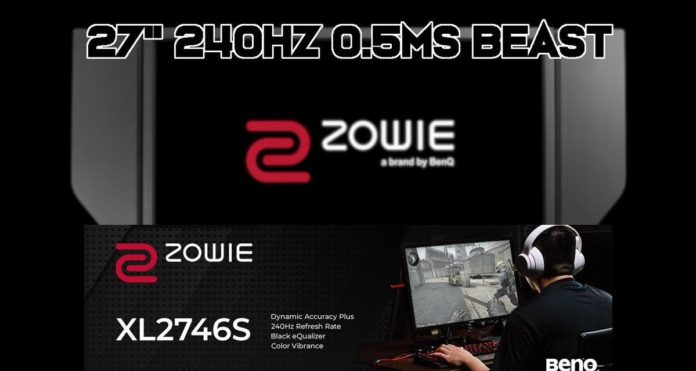 BenQ, one of the most familiar brands in the monitor, introduced the new player monitor Zowie XL2546S. BenQ’s new monitor has a resolution of 1920 x 1080 and a refresh rate of 240 Hz.

As the game world develops, we see many improvements in new products that join this world. Professional gamers, in particular, rely not only on their abilities but also on these new products to enter the game world in order to have superior performance against their rivals.

One of the biggest assistive equipment that allows a professional player to take advantage of his opponent is the monitor. The more frames a monitor can project on the screen in one second, the faster the player’s response. Here, BenQ’s newly introduced monitor gives players a really great advantage by showing 240 frames per second.

BenQ’s new 240 Hz monster: Zowie XL2546S
Today, BenQ introduced its Zowie XL2546S monitor, which it designed especially for e-sports. The new monitor introduced by the company aims to show players the highest number of frames that can be displayed in one second, with a refresh rate of 240 Hz at 1920 x 1080 resolution. The monitor also hosts several important features.

Introducing the new 240 Hz monitor, BenQ also made a recommendation for graphics cards that will allow you to use this monitor at full capacity. According to the company, you need to have one of the NVIDIA GeForce GTX 980 and AMD Radeon RX 480 graphics cards or better to see the performance of your 240 Hz monitor.

While browsing the monitor’s design, the parts that are next to it and can be folded are definitely noticed. These are the ‘Shield’ pieces that will allow BenQ to focus on gamers’ games. These adjustable and removable parts help players focus entirely on the screen, not the environment.

Another detail that may catch your eye while examining the monitor is the mouse-like round object. This BenQ tool enables easy switching between Zowie XL2546S ‘display modes. Players can easily access their previously saved profiles with this tool.

BenQ, which has managed to attract attention with its interesting and useful Zowie XL2546S monitor, unfortunately did not make any explanation about the price.

Itaú wrongly transfers R $ 1 million due to failure with...