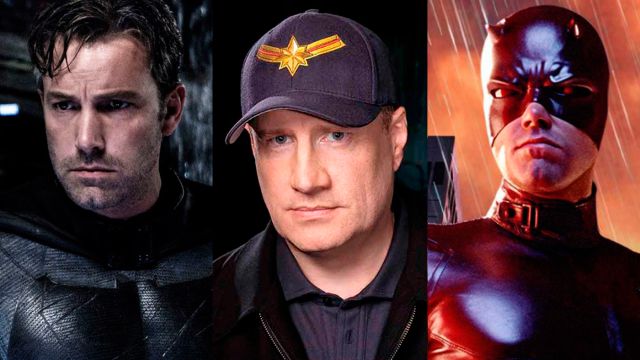 The famous actor who will return as Batman in The Flash praises the work of the president of Marvel Studios after working with him on the adaptation of Daredevil.

Ben Affleck, an actor who will return as Batman in the next film The Flash after leaving the role at the end of his participation in Justice League, has expressed his admiration for Kevin Feige, president of Marvel Studios and head of direct competition for DC, a company in which Affleck has been able to explore the character of the Dark Knight in two full films.

They worked on the Fox movie Daredevil

This has been done in a recent interview collected by The Hollywood Reporter in which Affleck remembers his experience as Daredevil in the first adaptation of the Hell’s Kitchen vigilante in 2003 by Fox and Marvel and in which Kevin Feige was involved, moment in which the actor has taken the opportunity to praise his career and praise his professional work, especially in everything related to the UCM.

“Kevin Feige is the most successful producer who ever lived, it absolutely has to be said that he is the greatest. He is the only guy in the world who if he told me: “I know what the public wants, this is what we are going to do,” I would believe it in the blink of an eye. He knows his audience like no producer, he is a true genius. He knows exactly how to wink at the audience, how to put them on the ropes, how many special effects to use, how many jokes, what is the sensitivity, what is the tone. Because then people did not know if they should move away from the tights or hug them, or take it more seriously “, referring to the time in which he played Daredevil, a film that did not work out as expected.

Ben Affleck will once again wear the Batman mantle in The Flash, a film that aims to be a turning point in the DC Extended Universe to reorganize its current franchises and who knows if to welcome new actors and actresses in key roles.