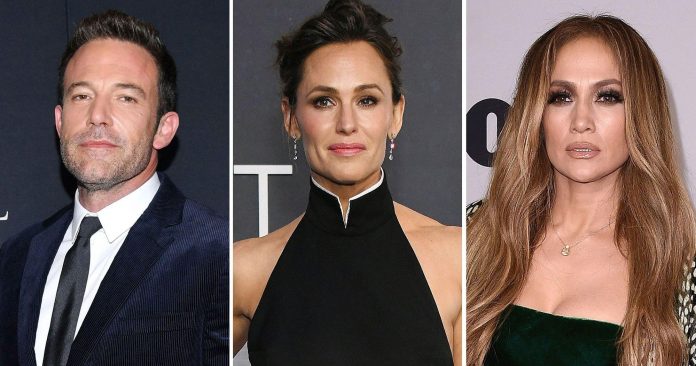 More than one anniversary? When applying for a marriage license, Ben Affleck indicated the date of his divorce from Jennifer Garner exactly nine years before his wedding to Jennifer Lopez.

Ben Affleck and Jennifer Garner: what they were like

49-year-old Affleck, who exchanged vows with 52-year-old Lopez on Saturday, July 16, in Las Vegas, wrote that he divorced 50-year-old Garner on July 16, 2013 in a written application for a marriage license. However, the former couple did not finalize the divorce until October 2018. The duo filed for divorce in April 2017 after announcing their split in June 2015.

Lopez, for her part, announced the date of her divorce from Marc Anthony on July 1, 2011. Although the “Jenny From the Block” singer and 53-year-old Anthony announced their divorce in 2011, the divorce was not finalized until 2014. The “On the Floor” singer shares 14-year—old twins Emma and Maximilian with Anthony, and the “Argo” star shares three children with Garner – Violet, 16, Serafina, 13, and Samuel, 10.

Bennifer’s wedding took place 18 years after the couple called off their first engagement in 2004. The Hustlers actress talked about the wedding in her newsletter the day after the ceremony in Sin City.

“We did it. Love is beautiful. Love is kind. And it turns out that love is patient. Twenty years of patience,” she wrote. “[The wedding] was exactly what we wanted. Last night we flew to Vegas, stood in line for a license with four other couples, and they all made the same trip to the wedding capital of the world.”

According to an insider, in the future the duo plans to arrange a larger celebration. “Jen and Ben want to celebrate their love with a big ceremony for friends and family,” a source told Us Weekly. The insider added that the couple had been talking “about running away for several months, and it seemed right to them.”

At least one of Lopez’s exes is glad she’s moving on. “He is happy for her and happy that she is with the man she is destined to be with,” a source exclusively told us of Alex Rodriguez, with whom the “Marry Me” star was engaged from March 2019 to March 2021. “Now he has a new relationship. and just as happy. He travels everywhere and lives his best life. He’s really focused on his family, his career and what’s going on with him.”

The insider added that the 46-year-old MLB graduate “went about his business” after seeing the news about his ex-fiancee’s wedding. “[His] relationship [with Jennifer] ended some time ago — he came to terms with how it ended. He respects her and sincerely wishes her only the best,” a source told us.

In addition to her relationship with Rodriguez and Anthony, Lopez was previously married to Cuban actor and producer Ojani Noah from February 1997 to January 1998 and to her former dancer Chris Judd from September 2001 to June 2002.

YouTube: Video Chapters Are Released On TVs And Consoles