Home Entertainment Below deck: The 10 Worst crew members in the entire franchise 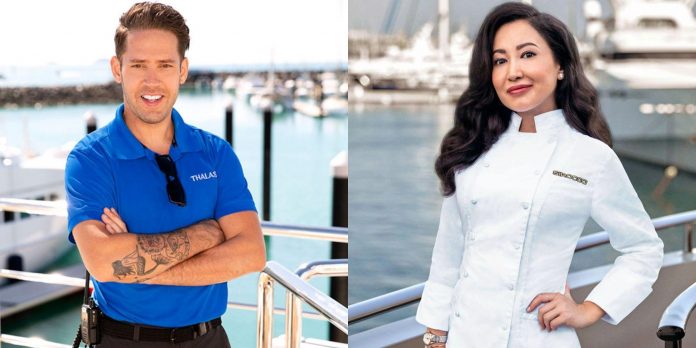 Below Deck: Sailing Yacht Season 3 and Below Deck Down Under Season 1 are sailing the horizons on Peacock. Many personalities aboard the superyachts make for a fun watch for the fans, but sometimes those personalities are less than positive.

Living in close quarters with people with whom one works is not an easy ask, and these crew members work around the clock to give guests the best vacation of their lives. But poor work ethic, lying on resumes, and just plain bad attitudes from one person can make the job a living hell for the entire crew, and not being able to go home and away from that person can be a severe emotional and mental drain.

Tom’s time on the Parsifal III was not an easy one from the get-go. Immature and irresponsible, he tried too hard to convince everyone that he was ready for the yachting life when in reality he was anything but. His drinking only heightened the problem as he would get mean and belligerent, especially toward Ashley and Gary.

Related:  9 Unpopular Opinions of Below Deck, According To Reddit

The final straw that caused Captain Glenn to fire Tom was the night he was on anchor watch. During his shift, the winds unexpectedly picked up to over 30 knots and caused the anchor to start dragging. Instead of getting the deck crew up right away, he dragged his feet,until they got up themselves after hearing the scraping of the anchor on the bottom of the sea. While he did own up to his mistake, it was too little too late. The crew, especially Glenn, had lost trust in him.

On paper, Mila’s resume was impressive. She was a Le Cordon Bleu-trained chef with an Instagram page filled with delicious-looking dishes, so Captain Sandy and Hannah had high hopes for the charter season. However, it soon became evident that Mila had no clue what she was doing in the galley and created meals that looked worse than any fast food.

The sour situation turned even worse when it was revealed just how vile of a person Mila was. During a night out, she revealed that she was homophobic, which is awkward considering one fact about Captain Sandy is that she is gay. Mile was fired in episode 5, and the question of whether she lied on that impressive resume remains open.

Accidents happen, but it is the response to them that matters. After an oven caught fire in the galley one night, Leon claimed that the pans that were stored there caused the fire. Lo and behold, it and the oven were greasy. Instead of admitting he screwed up, he blamed Kate and lied to Captain Lee that she was intoxicated when she was supposed to be heating a pizza for the guests.

After admitting to not seeing Kate drink, he doubled down on the lie by saying he saw her other nights in an act of deflection. He was rightfully fired for his actions but was given the opportunity to finish the current charter. Leon refused and bailed that day. Fan-favorite Ben Robinson, a solid chef with a great work ethic and a funny bone, returned to the show to finish the season strong.

One of the worst second stews, Lara quit three episodes in. She didn’t get along with Hannah or most of the crew. Nothing Hannah tried made the situation better. Captain Sandy attempted to intervene but to no avail, as Lara gave off what was called “f— you energy,” laughing at serious matters and infuriating the captain.

Things escalated so much that Lara left in the middle of the night and returned the next morning before the first charter to inform Captain Sandy, who promptly retrieved her things. This came as a relief to many of the crew who were happy to see that the canker sore was off the boat. Working on a superyacht is hard, but having a good crew makes the experience better.Wwithout Lara, the season finished stronger than if she’d stayed.

Socially inept and full of himself, Trevor quickly lost the respect of his crew members for his abrasive behavior during the first charter when he made disparaging remarks towards others.

Worse, Trevor started the season as a senior deckhand and was demoted to deckhand. When the demotion didn’t get through to him, he was fired in the fourth episode after he got too drunk, mocked Marines and called his crew members disparaging names. Ultimately, Trevor was simply inept at the job, which is why Trevor is  one of the worst deckhands in the Below Deck franchise.

Magda Ziomek, Down Under Season 1

Magda had a hard time being apart from her boyfriend and constantly texted him throughout the charters. She’s vacillate between smiling and angry over something her boyfriend had texted or done that day. It was interfering with her work, which she wasn’t much good at anyway.

Captain Jason had to step in after he was told that Magda used more of the data plan than the rest of the crew combined. Eventually, her work ethic and skills weren’t up to par, and Aesha made the hard decision to let her go with two charters left in the season.

One thing Below Deck has taught the fans: never lie on your resume. This may seem like a harmless offense but could have major consequences. Andrew claimed to be an experienced deckhand. It didn’t take long for that lie to come to the surface as he made rookie mistake after rookie mistake. He confessed that his entire resume was fabricated.

Andrew was fired and, because of this incident, the Below Deck casting team now checks all the references that each crew member is required to have. While the Season 2 crew was lucky that no limbs were lost during Andrew’s time on the boat, oversights like that could mean deaths in the future.

As the rest of the crew was working hard, Jennifer slept in and did not take orders from Kate very well, claiming she was out to get her. Even more annoying was how Jennifer reacted when Kate gave her instructions. Her eye rolls were disrespectful, and her comments were unnecessary.

Many fans and crew wanted her off the boat but alas, that day did not come. The appearance-obsessed stew was able to see the end of the season no better than she boarded. She was another one who needed to control her behavior, and her horrible half-apologies didn’t smooth anything over as she repeated the behavior the first chance she got.

Ryan McKeown, Down Under Season 1

From the beginning, Ryan had an attitude towards Aesha and would barely communicate with her. When things went wrong, he took no accountability. Hostile, rude, arrogant, and delusional, Ryan couldn’t fathom being questioned about anything, and at times completely disregarded guest requests that he considered beneath him. He decided what the guests were eating and when and didn’t care about anything anyone said about it, then claimed that it was only Aesha who complained.

Captain Jason eventually fired him, but Ryan didn’t leave quietly or gracefully. He loudly expressed his anger about the captain’s decision to the point Captain Jason had to set a time limit on his departure.

Lexi got into drunken several altercations that ended in nothing but more drama. Demotion didn’t correct her behavior, and when she was finally fired, the rest of the crew felt apparent relief.

Dismissing others, calling other women bitches, bragging about her money, sexually assaulting Lloyd, assaulting multiple crew members, and telling Mathew that his mother should have aborted him, Lexi’s attitude and behavior was atrocious from beginning to end.