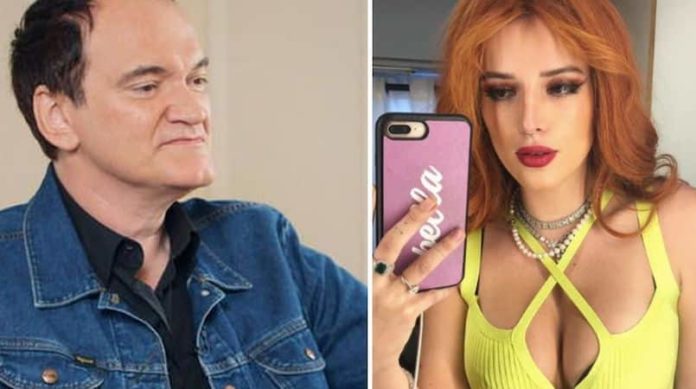 This Friday, March 27, Quentin Tarantino celebrated his 57th birthday. Many stars then put men in the spotlight on social networks. And this is also the case for the sublime Bella Thorne.

Very active on social networks, Bella Thorne does not hesitate to display herself as she is . But that’s not all. Far from wanting to have the most beautiful Instagram account, she reveals tweets that she likes. Snapshots of her with blue hair but also hilarious videos.

But this Saturday March 28, Bella Thorne posted a new photo on her Instagram account. In her feed, she highlighted Quentin Tarantino. The reason ? The latter celebrated his birthday .

Obviously a fan of the director, she did not hesitate to highlight it. But that’s not all. She also released an adorable message to celebrate her 57th birthday.

Happy bday to my favorite director ever❤️ the way you direct and talk to people, so articulate so Caring in the way u speak. making people see a different side to the story is so beautiful! Beyond talented and smart. Thank u for making beautiful Cinema for us to enjoy through out the years ❤️

BELLA THORNE: VERY NICE BIRTHDAY MESSAGE TO QUENTIN TARANTINO!
In caption of her Instagram photo, Bella Thorne also wrote with great love: “Happy birthday to my favorite director . The way you lead and talk to people, you carefully articulate the way you speak . ”

The singer also added : “Showing people another side of the story is so beautiful! Beyond talent and intelligence. Thank you for making beautiful cinema so that we can enjoy it over the years ” .

With her picture, the young woman also collected more than 84,000 “likes” in two hours from her fans. In the comments they also wished a happy birthday to the director of many masterpieces.

As a reminder, Quentin Tarantino has made films that have had real success such as Django Unchained, Inglourious Basterds, Pulp Fiction or Kill Bill. With more than twenty films to his credit, he has marked the world of cinema.

“The Government Has Money Pressing Machine”

Danny Ocean Will Act In Madrid and Barcelona For The First...