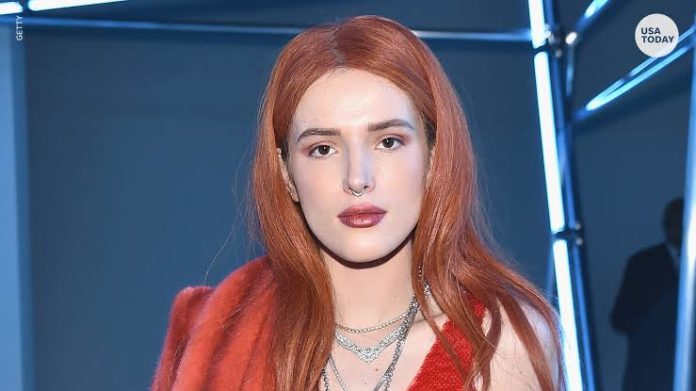 Bella Thorne accused of “glorifying” domestic violence with her Halloween makeup. For Halloween Bella Thorne decided to wear makeup as if she had been hit. The fans did not really appreciate the makeup!

Of all the Halloween costume and makeup choices, Bella Thorne opted for a battered make-up. The fans rebelled against her! We explain to you!

Indeed, Bella Thorne did not choose the right Halloween theme. For the 22-year-old actress chose to wear makeup as if she had been hit or was assaulted. Internet users have pushed a big jab on the social networks. As well as in the comments of the photo.

The young woman appears with red eyes, bloody lips and multiple bruises. She unveiled this make up in a selfie series on Instagram this Wednesday, October 30th. In fact, the fans were convinced that an accident had happened to her at first. Because makeup seems ultra realistic!

BELLA THORNE: A FLOP FOR HALLOWEEN’S MAKEUP!
“Hire me for your Halloween makeup, I’ll take care of you,” Bella Thorne wrote under her post. However, her makeup does not remind the party, because it is not disguised in anything. So fans have posted many comments about it. “Why is it culturally appropriate during Halloween to glamorize the physical violence?” Or again, “For me, it looks like domestic violence,” says surfers outraged by this make up.

So many have seen a reminder of physical violence. It’s doubtful that Bella Thorne’s goal, however she missed consideration! It is unlikely that the young woman answers the accusations, perhaps not seeing what is the harm in this makeup. In any case, her real costume was that of a Scout. As she unveiled Thursday on her account Instagram. Case to follow about this controversy that has not finished making noise!

Daniella Chavez shouts: “I gave it to more than one and...