Home Entertainment Bella Poarch Reveals Who Her BTS Love Is 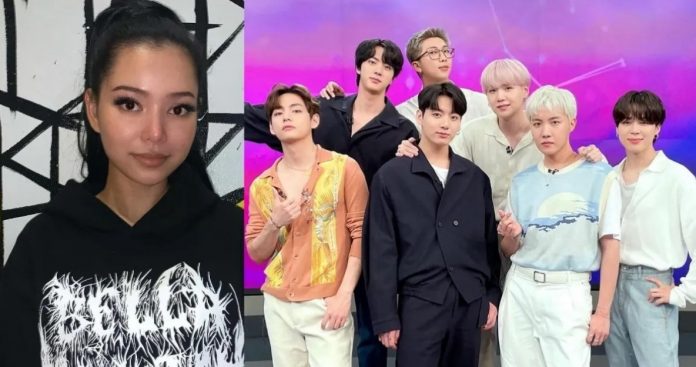 Bella Poarch gave a funny hint about who from BTS stole her heart, who is her bias? The famous influencer and singer had confessed that one of the members of BTS makes her heartbeat, but recently she gave a hint without any mystery about the identity of this idol.

If you are a constant user of TikTok, you probably already know the successful model Bella Poarch, who in addition to showing her talent in different projects has also stolen the eyes of ARMY after an unexpected mention of BTS.

Some time ago the girl said that, although she was currently single, there was a boy who made her heartbeat strong and is nothing more and nothing less than a member of the BTS band. She did not reveal who is the K-Pop idol that fell in love with her, but little by little the truth came to light.

Bella Poarch could have a crush on any of the Dynamite interpreters since the seven members of Bangtan Sonyeondan coincide in being handsome, talented, and with irresistible personalities, can you imagine who she really likes?

BELLA POARCH HINTS AT HER BIAS IN BTS, WHO COULD IT BE?

The celeb was questioned on Twitter about who her crush could be, but without the question directly including the guys from BTS, she answered with a riddle that was not difficult to solve. Bella said:

Starts with an R…. Ends with an M🤫

Does it start with R and ends with M? Could it be RM? LOL! The group’s fans were amused by this signal which was actually quite straightforward, so they joked by changing the celebrity names to include both letters, but deep down everyone knew who it was talking about.

Tell us if you already imagined that the leader of the group was Bella Poarch’s celebrity crush or, if not, who you suspected it might be.