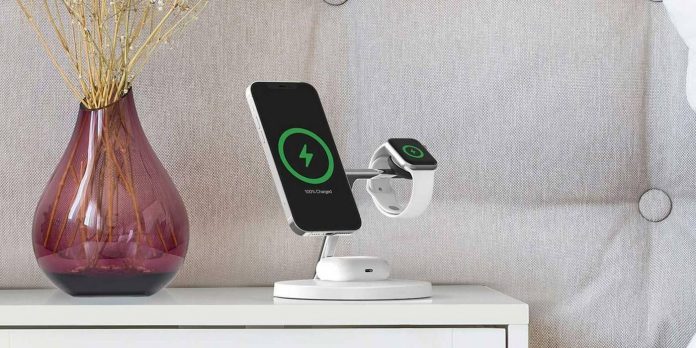 Belkin has released an updated BoostCharge Pro 3-in-1 wireless charging stand that can charge iPhone, Apple Watch and AirPods at the same time. This is an upgrade of the existing BoostCharge Pro 3-in-1 wireless charger, which was released at the end of 2020 at a price of $139.99. It had a tree-like structure with two stainless steel “branches” to accommodate the iPhone and Apple Watch. It also had a 5W Qi charger built into the base to wirelessly charge any Qi device, including AirPods and AirPods Pro.

Wireless charging has become increasingly popular over the years and is available on almost all flagship smartphones around 2022. Although this technology appeared on Android devices a few years ago, the first iPhones to receive this feature were the iPhone 8 and iPhone X, which were launched in 2017. Since then, all iPhones support charging without a cable. As for MagSafe charging, it originally debuted in Apple’s MacBook a few years ago, before the company introduced it in the iPhone 12 lineup in 2020.

Related: Belkin’s Car Vent Mount Pro is One of the Best MagSafe Accessories

The new three-in-one BoostCharge Pro charger from Belkin retains the design and form factor of its predecessor, but supports fast charging for the Apple Watch Series 7. According to the official Belkin product page, the device can charge the latest Apple Watch models from 0 to 80 percent in just 45 minutes. However, please note that older Apple Watch models are not compatible with the new fast charging standard, which means that Apple Watch 6 and older models will still charge at standard speed.

In addition to charging 15W for Apple Watch Series 7, the new Belkin charger also provides fast charging up to 15W for iPhone 12 and 13, as well as 5W charging for AirPods and AirPods Pro. The retail package for the new BoostCharge Pro model includes a 40W power adapter and is already available for pre-order on the official Belkin website. The device will also be available for purchase at Apple Stores in the US and will be launched worldwide “in the coming months.”

The ability to quickly charge the Apple Watch is a significant advantage, especially since it has become difficult to charge them at night for people who use them to track sleep. However, this feature alone cannot attract too many users to upgrade to the new model immediately, especially because of its rather high price. However, despite the price, the brand new Belkin BoostCarge Pro 3-in-1 wireless charging stand may well be one of the best third-party accessories for Apple devices this year if it looks like its predecessor.