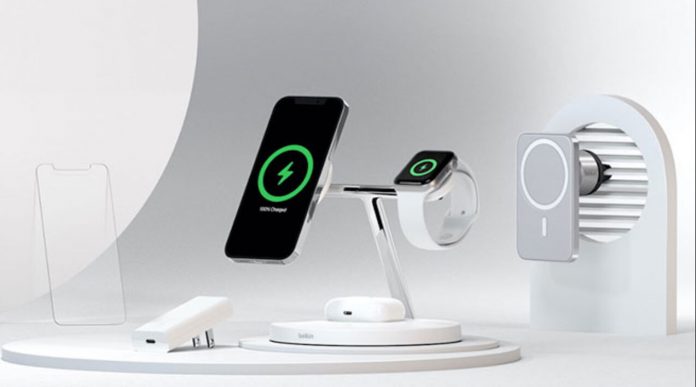 This new product is described as an iPhone stand, more precisely as a magnetic phone holder, and performs face tracking. It works with the iPhone 12 series, and it holds onto the phone with the help of magnets inside these devices. It then tracks you using face tracking. Thus, wherever you stand, the phone is also facing you.

This attractive MagSafe phone stand from Belkin can work both vertically and horizontally. It is capable of vertical rotation between -15 and 30 degrees and horizontal rotation of 360 degrees. It runs on three AA batteries.

However, the face tracking feature of this accessory does not support video calls like Zoom or FaceTime. Face tracking works only when video recording is made on Belkin’s own iOS app. By the way, the device is also compatible with Apple’s official MagSafe cases. It will be available in the US very soon, with a price tag of $ 65.

Belkin has also released a fitness-focused phone dock. This allows the phone to be attached to places such as gym equipment or bicycle handlebars with the help of magnet force. It can rotate 360 ​​degrees thanks to the ball inside. This product will also be on sale for $ 35.

In addition to all this, Belkin has also released a 2500 mAh portable charger with a price tag of $ 50. This clings to the back of the phone with the help of magnetic force. Other products include a 10000 mAh power bank with a $ 70 price tag and a wireless charging mat. In addition, the portable charging mat with an overseas price of $ 30 and a 7.5W wireless charging stand with an overseas price of $ 35 are among other new products.