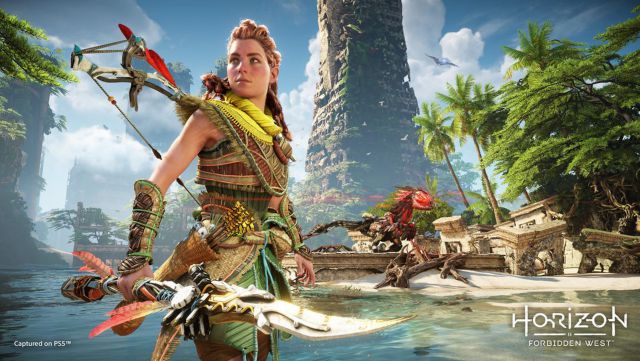 Forbidden West: With the sequel just days away, we look back at how Guerrilla hooked players through the mysteries of Aloy’s first adventure. Alert: spoilers! The intense rise of the open world over the past decade – and now into the present – has become a blessing or curse depending on both the game and the player. Adventures, Shooters, role-playing games, racing games, Survivals… No genre is spared, and practically no large or medium-sized company has wanted to pass up the opportunity to put their own spin on the formula. Of course, this urge to offer wide open games long predates the last generation. Or to the three dimensions themselves: during the eighties, the Ultima saga already took the Dungeons and Dragons boards to digital worlds with non-linear developments, where each player traced his path and wrote his story.

But what was once a feat is now standard. And what is standard ends up falling into a routine. Technological progress has made open worlds in 3D and HD available to more and more studios, but it has also made it more difficult to stand out, to maintain interest until the credits. Before, saying that your game lasted 40 hours was a claim. Now, our most cynical side springs like a spring. 40 hours doing what? Taking walks? Repeating the same two or three types of missions with minor variations? Open worlds are no longer a hook in themselves. It takes something—a lot—more to keep from falling prey to fatigue.

Released almost five years ago, in February 2017 (March in Europe), Horizon Zero Dawn was one of those cases that did manage to break through the growing skepticism with the format. With most of the notes in the field of outstanding and more than ten million copies sold, the game from the Dutch Guerrilla Games can only be classified as a resounding success. A success that, naturally, owes much to the economic and marketing support of Sony; but just as the lukewarmness with Days Gone would show later, also one capable of contributing enough on its own so that we are now a few days away from receiving its sequel.

It’s clear that being an audiovisual prodigy—especially for its scale and platform—didn’t hurt. But Horizon, like Aloy, was more than just a pretty face. It didn’t take many minutes to show that, after years of jumping between Killzone and Killzone, Guerrilla had delighted in shaping this new vision. A primitive world in the future, where warriors in tribal graffiti went out to hunt robotic animals with bows and arrows. A world where the player could also dress in skins, create their own weapons and ambush increasingly larger and more dangerous metallic creatures. Binding them, stunning them, exploiting their weaknesses with different types of arrows, using cannons ripped from their own bodies against them.

Multiverses: Explaining the story of Armati and President Morty

Lady Gaga is officially approved for the role of the Joker...