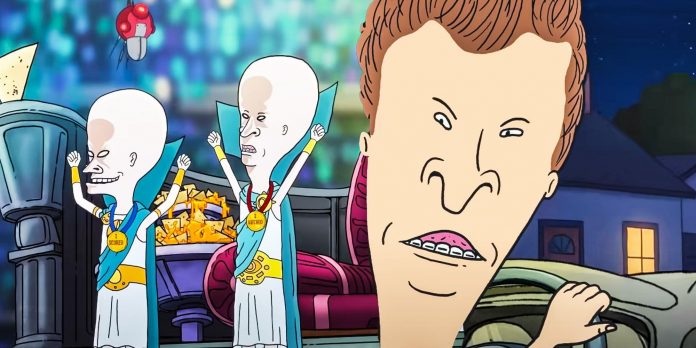 In fact, the plot of “Beavis and Butthead make the Universe” is based on the characters’ desire to “score points”. After the arson of the school science fair, Beavis and Butthead are sentenced by the court to a space camp. At the camp, they meet astronaut Serena, the antagonist/lover of the film.

Because of poorly formulated training tips, Beavis and Butt-Head believe they will “score” with her. They spend 18 hours trying to insert a mechanical phallic device into the hole, and they are quickly recruited to participate in a space mission to observe a black hole, into which they, of course, eventually get sucked. Then they land in 2022, where they meet with their “smart” options.

How the Beavis and Butthead Comedy Works in 2022

The humor of Beavis and Butthead has not changed at all, which is refreshing. Because of this, the film is mostly childish, stupid humor, causing nostalgia for those who grew up on it. One particular scene where Beavis and Butt-Head enter a gender studies course at college sounds plausible when they learn about white privilege and then immediately come out to take advantage of it, which ends up putting them in jail. Beavis utters the phrase “we subvert existing paradigms” by stealing a whole cake, taking a bite, then throwing it in the trash before knocking the card out of someone’s hands.

Their humor is really relevant in 2022 thanks to the straightforward and ironic portrayal of the worst possible behavior combined with rational characters who unwittingly inspire them to do terrible things. The modernization of the humor of Beavis and Butt-Head probably gave way to making the story more conceptual in order to keep up with what most films are showing these days.

What happens at the end of the movie “Beavis and Butthead make the Universe”?

In the end, Beavis and Butthead “defeat” the antagonist of the film, showing that they are not evil geniuses who have been chasing her for more than two decades, but just two stupid teenagers. Serena then asks what needs to be done to silence them as she is wanted for attempted murder if they talk to the authorities.

After some thought, Butt-Head says: “Do we want to score?” And while she is thinking about it, “Smart” Beavis makes a speech seducing Serena, and all three (“Smart” Beavis and Butthead, along with Serena) pass through the portal to the home world of the “Smart” couple. . As Beavis says in their ending: “It wasn’t me, but Beavis scored somewhere out there.” This confirms the fact that not only Beavis and Butthead are virgins in the canon, but also all their versions, except the “Smart Ones”.

Every option in Beavis and Butthead makes the Universe

This is by far the most world-building that viewers have ever seen from the romp of Beavis and Butthead, as well as the most unusual ending. However, given that there is a multiverse in play right now, these two can return in many ways, not just as themselves.

Hawkeye: Directors Comment On The Origin Of Echo’s Powers