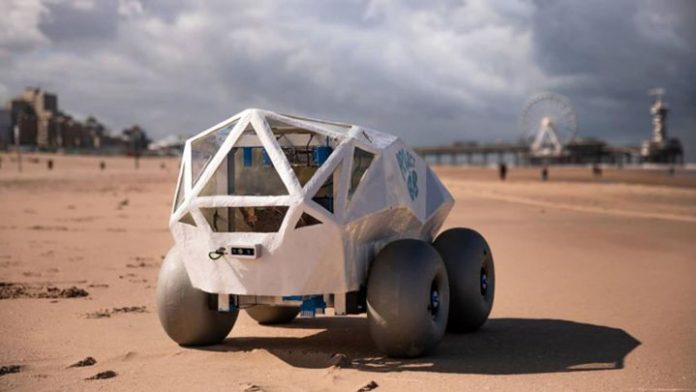 BeachBot: Let’s say it clearly: Throwing garbage on the beach is dirty using even the inclusive. And among the cans, food scraps and bags you can also see cigarette butts. Because there are those who think that the sand is their own fucking ashtray. For this reason, this particular robot has been created, in charge of patrolling, locating and taking the cigarette butts of any unscrupulous person who does not bother to pick them up.

After a visit to a Dutch beach, the inventor Edwin Bos had an idea that he shared with his partner Martijn Lukaart from the TechTics company: An autonomous robot with an IAl module that was capable of patrolling a beach and seeing cigarette butts on the beach. sand to collect them. And after a few ‘pitches’ and designs, the idea has materialized in the BB or BeachBot, a robot capable of even picking up cigarette butts partially buried in the sand.

At just 80 centimeters wide, BeachBot features two on-board cameras that it uses to look ahead and down. The robot is also designed to avoid people and objects. To catch the butts, BB uses two gripping arms that lowers and then pushes into the sand. The cigarette butts are then thrown into an internal container. It can currently run for an hour on battery power.

This beach cleaner that looks like a space exploration vehicle for Mars, with its signature NASA-like design and those huge wheels, automated has an AI brain, and like modern cars, BeachBot uses artificial intelligence and detection algorithms. of pictures to distinguish a cigarette butt from other beach objects, such as flip flops, towels and larger pieces of trash.

To do this, the TechTics team had to train the beach vehicle and its AI using photos of cigarette butts in different states. TechTics uses the Microsoft Trove application, which provides AI developers with photos shared by people. So far he has collected 200 photos to show you, and he plans to collect 2,000 so that BeachBot can find cigarette butts stuck almost anywhere.

During its first demonstration in 2020 on World Cleaning Day, BeachBot managed to find 10 cigarette butts in 30 minutes. This may not sound impressive, but it is only the first prototype and BeachBot is still learning. The idea is that in the future it will be “smart” enough to pick up other bits of trash without scaring the beach kids, but it is still a welcome development.

According to TechTics, BB will learn faster as its database grows. The company aims to accumulate more than 2,000 images and will pay collaborators for their entries. And the best part is that BeachBot does not work alone: ​​It has a group of miniature robots that map or scan the beach for cigarette butts before BB goes to work.