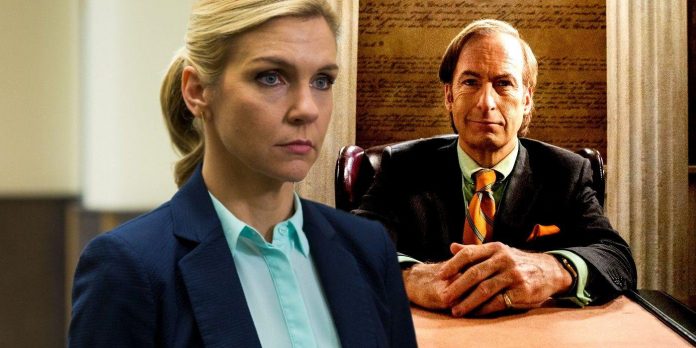 Better Call Saul just explained Kim Wexler’s Breaking Bad fate and smashed every single fan theory in the process. Heading into “Fun & Games,” Better Call Saul season 6 had already accounted for most of its Breaking Bad absentees. Nacho Varga died following his part in the attempted assassination of Lalo Salamanca, Howard Hamlin had the misfortune of being shot by Lalo despite his innocence, then Lalo himself felt the cold, spice-coated wrath of Gustavo Fring. The last name not yet crossed off? Rhea Seehorn’s Kim Wexler.

Kim becomes as close to Bob Odenkirk’s Jimmy McGill as can be during Better Call Saul’s latter seasons, but doesn’t receive so much as a glancing mention during Breaking Bad – an oddity the spinoff needed to address before the end. Naturally, Kim’s fate has sparked endless speculation among viewers, with suggestions ranging from a grizzly murder to an enforced disappearing act after getting caught by Albuquerque’s authorities. Better Call Saul season 6, episode 9 finally addresses the Wexler in the room, definitively confirming why she isn’t around during Walter White and Jesse Pinkman’s era.

Better Call Saul’s explanation for Kim’s disappearance may not deliver the adrenaline rush of a death scene, or the timeline gymnastics behind the “Kim was working for Gus all along” theory, but Vince Gilligan and Peter Gould manage to surpass expectations nevertheless. Here’s why Kim isn’t around during Breaking Bad… and why it’s perfect.

Distraught by Howard Hamlin’s murder and her not inconsiderable part in it, Kim quits her job as a lawyer and breaks off her marriage with Jimmy, rightly pointing out the poisonous nature of their partnership. This breakup explains why Kim doesn’t appear in Breaking Bad. She shows no deliberation or doubt when ending her marriage, and Better Call Saul season 6, episode 9 ends with a time-skip approximately one year into the future (judging from Jimmy’s Nov 05 license plate sticker). As if the sex worker in his bed wasn’t clue enough, this post-skip Saul Goodman is the fully-evolved version seen in Breaking Bad, all but confirming Kim never returns between now and Jimmy’s Breaking Bad exit.

Better Call Saul doesn’t address exactly where Kim relocates to, but considering how badly Howard Hamlin’s death is prodding her conscience, one would expect she’d move as far away as reasonably possible, putting some considerable geographical distance between her and the events of Breaking Bad.

Compared to the wild and wonderful theories floating around, Kim’s Better Call Saul exit is rather straightforward – but “Fun & Games” isn’t any less effective for that simplicity. There’s no shocking violence or gritty death scene, but when Kim begins acting strangely – staying unusually quiet, kissing Jimmy in the HHM parking lot they spent so much time in, then abruptly quitting her job – Better Call Saul generates just as much tension and suspense as any of season 6’s (many) major deaths. The outcome feels just as gut-wrenching too. Audiences become attached to relationships just as they do individual characters, and while Kim Wexler survives Better Call Saul, “Fun & Games” marks the death of her relationship with Jimmy – a tragedy viewers will mourn almost as much as if Kim had been shot by a zombified Lalo Salamanca returning from the grave.

Kim’s Better Call Saul exit also feels perfect because it makes perfect sense. She and Jimmy played with fire by flirting with the cartel and scamming Howard Hamlin. A burning was inevitable, and now a man whose greatest crime was buying vanity license plates has died. It’s only right that Better Call Saul should ensure grave consequences follow grave actions, and since jail time and getting into trouble with the mob don’t fit with Breaking Bad, the dissolution of Kim and Jimmy’s marriage is the only logical recompense.

Most theories explaining why Kim Wexler doesn’t appear in Breaking Bad involved some degree of retroactive explanation. If Kim died, someone would’ve needed a motivation to kill her. If Kim went to jail, Better Call Saul would’ve needed to explain why Jimmy got away with it. If Kim was secretly pulling strings for Gus Fring, most of Breaking Bad would’ve needed a perspective shift. Kim leaving Jimmy because their criminal-tinged love reaches dangerous levels of toxicity feels like the logical culmination of where Better Call Saul has been heading since the beginning – even if it’s not quite as glamorous as some of the theories viewers invented along the way.

By beating the odds and surviving Better Call Saul’s prequel era, a spark of hope still burns for Kim Wexler. Sooner or later, Better Call Saul season 6 will return to the Gene timeline, set somewhere around Breaking Bad’s ending, which means at least 6 years after Kim decided she better call off her relationship with Jimmy. For Rhea Seehorn to never appear in Better Call Saul again after “Fun & Games” would feel strange indeed – and that makes a comeback in Gene’s future incredibly likely. Four episodes of Better Call Saul remain, after all. Nacho’s story is settled, Gus and Lalo’s feud is over, and Mike’s transformation is complete.

Now Kim Wexler’s fate has been resolved and Jimmy has fully embraced the neon-shirted gaudiness of “Saul Goodman,” the remainder of Better Call Saul will surely turn its attention towards Jimmy McGill’s post-Breaking Bad future. Maybe Jimmy leaves his duties at Cinnabon to track his ex-wife down. Perhaps it’s Kim who comes looking for Jimmy after prising his location out of Ed Galbraith. Or maybe fate unexpectedly brings the dynamic duo back together after so many years separated. If a happy ending is on the cards, Rhea Seehorn simply must be involved. Kim Wexler might be done with Saul Goodman, but don’t expect Better Call Saul to be done with Kim Wexler quite yet.