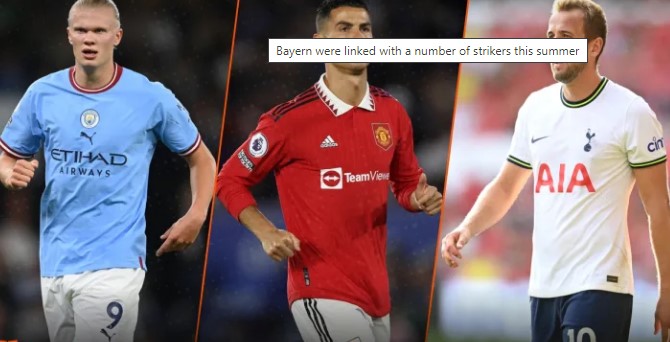 Bayern Munich director Hassan Salihamidzic shared information about how the club is looking for a new striker this summer.

The Bundesliga giants pursued Erling Holand at the end of last season, but eventually let him go to Manchester City, and as soon as Robert Lewandowski asked to leave for Barcelona, Bayern began looking for another high-level replacement.

Most of their interest was connected with Harry Kane from Tottenham, and Bayern openly spoke of their admiration for the Englishman — unlike Cristiano Ronaldo, from whom they very quickly distanced themselves.

Now, in an interview with Sky, Salihamidzic has revealed the truth about the connections with all three.

What happened to Haaland?

” We were negotiating, but it became clear that both sides could go wrong. That’s why he’s at Manchester City now, and that’s why we have other players.”

Does it annoy you that you couldn’t set him up with Sadio Mane?
“No. I’m very happy with how it went. You have to see how the season will develop. Sadio is a huge asset for us. He fits in very well with the team and has an excellent mentality. He’s a great boy, he trains. really good and leads the team forward in games. We also have Mathis Tel, whom we respect very much and who has many qualities. I like Matthijs de Ligt too.”

Do you feel sorry for Ronaldo because of his situation at MU?
“He’s an incredibly big personality. A major player who has left his mark on the world of football in recent years. For us, this was not an option, because we were doing other things and planned the attack in this way. But you don’t have to feel sorry for him. He is a great footballer who has achieved great success in recent years.”

Did you talk to Ronaldo on the phone?
“No.”

Have you talked to his agent?
“I often talk to Jorge Mendes. Yes, we talked.”

Roger Goodell spoke about the future of the Sunday ticket