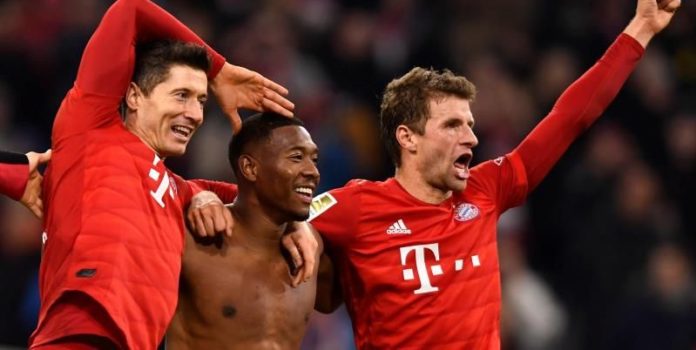 Bayern Munich beat Borussia Dortmund 4-0, with two goals from Robert Lewandowski, one from Serge Gnabry and a goal from Mats Hummels, in a match that gives a moment to a crisis crossed the Bavarian club.

Bayern coach Hansi Flick took the field with exactly the same team that had started the game against Olympiacos, leaving Philippe Coutinho and Thiago Alcantara once again on the bench.

Dortmund also repeated the team that had started in the 3-2 victory against Inter Milan.

Bayern came out in an aggressive plan, pressing Dortmund across the field and already at forty minutes generated a dangerous situation.

Thomas Muller recovered a ball that Kingsley Coman had just lost and put it long for Robert Lewandowski before the goal Roman Burki had to leave his area to cut the advance.

Bayern dominated in all aspects. He had more ball possession, won most of the individual duels for the ball and kept Dortmund away from the goal of Manuel Neuer.

In the 17th minute came the first goal, scored headlong by Lewandowski inside the small area to center from the right of Benjamin Pavard.

The goal came at one of Bayern’s most pressing moments, when Pavard received a rebound and sent the ball back to the area, where Lewandowski defined without problems.

Bayern’s pressure continued. In the 27th minute Burki avoided the second goal against a shot by Serge Gnabry and Dortmund went to the locker room without having finished off the goal.

In the 47th minute came the second. The Dortmund had left to turn to the attack and found himself with his back uncovered when a long pass from Javi Martinez reached Müller who, after starting behind the central line, shot a center from the left for Gnabry to score with a first-time finish .

Bayern’s dominance continued. Dortmund did not have a chance until the 69th minute when Paco Alcacer failed to finish off an Achraf Akimi center that Javi Martinez had slightly changed the direction.

But that situation was somewhat isolated. Arrivals and occasions were from Bayern. In the 52nd and 59th minute Gnabry and Lewandowski had been close to the third.

After 70 minutes Flick gave way to Coutinho and Thiago for Leon Goretzka and Gnabry. Before, in Dortmund, Marco Reus and Alcácer had entered.

None of the changes had more influence in the match. The tonic remained the same. Bayern kept coming and the third goal seemed a matter of time.

In the 76th minute the sentence arrived. Lewandowski won a split ball to Achraf near the area, controlled and played wall with Muller and then defined from a short distance.

The fourth was a goal at the door of Mats Hummels, in the 80th minute, trying to cut a center.

Flick has managed in two consecutive games to keep the goal at zero, after Bayern had gone through chronic defensive problems.

Today, in addition, Bayern commanded in the field from start to finish and the win could even be more bulky.