Home Entertainment Battlefield 2042 Will Reduce The Size of Its Maps and More on... 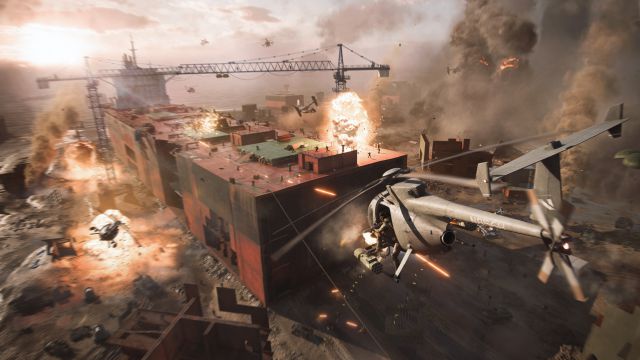 Battlefield 2042: EA DICE will use the extra power of the new generation to deliver even more massive games.The future of EA DICE’s shooter series is here. Gameplay has not been shown yet, but Battlefield 2042 has already been announced and in MeriStation we have been able to see it. If you want to know all the news, we invite you to read our complete advance. Although the game has been designed for older and newer generation PCs and consoles, the more powerful hardware will benefit from some major improvements over the older platforms. In fact, Xbox One and PS4 will reduce both the size of their maps and the maximum number of players per game.

This was announced by the study itself during the presentation event that MeriStation has had the opportunity to attend. While users of PC, Xbox Series X, Xbox Series S and PS5 will be able to play games of up to 128 players at the same time, those who do so in the previous generation will discover that that number decreases to 64 simultaneous users. However, this limitation will not affect any of the game mechanics, since all systems will be identical regardless of the system you are playing on.

Scaling down on Xbox One and PS4

It should also be noted that the real-time world events will also be identical, although the maps will be scaled and smaller than in the new generation. The reason is that the company wanted to make sure it offered epic battles on less powerful platforms as well. Not surprisingly, there are huge maps like Breakaway, with 5.9 km² of playable space.

Battlefield 2042 is designed as a multiplayer title, so DICE has decided to dispense with the campaign, a modality that has been present in previous titles in the saga. The game, which will be released on Xbox One, Xbox Series X, Xbox Series X, PS4, PS5 and PC, will present its first gameplay during the Microsoft conference at E3 2021: it will take place on Sunday, June 13 at 7 p.m. : 00 hours (CEST).

Destroy all people! 2: Reprobed presents a new gameplay trailer during...