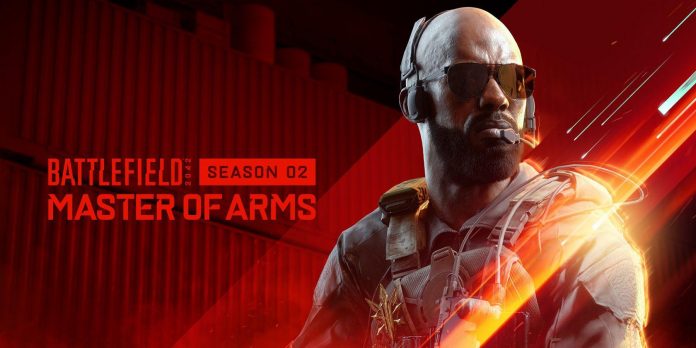 Battlefield 2042 is gearing up for its second season, and the cinematic trailer spectacularly highlights many of the new battle pass rewards. Battlefield 2042 players can unlock a variety of new equipment, including a new specialist and various skins, takedowns, vehicles and weapons.

The first season of Battlefield 2042, Zero Hour, started back in June and was generally considered a step forward for the game after its disastrous reception at launch. When Battlefield 2042 was released, it was sharply criticized by players, receiving about 80,000 negative reviews on Steam with many complaints directed at the lack of important features, such as tracking important personal statistics, as well as errors, performance and balance issues. Many of these issues have been resolved with the Battlefield 2042 Season 1 update, and it looks like the game will get a similar update with the release of Season 2 on August 30.

The trailer for Season 2: Master of Arms is an impressive presentation of the battle pass announcement, showing many unlocks from 100 levels with the help of well—edited gameplay footage. Of particular note is the new support specialist, Charlie Crawford, whose device is a deployable volcanic minigun protected by a large shield. Crawford unlocks at Level 4 of the Combat Pass, and his Cache Point trait also gives revived teammates extra ammo for gadgets. The new vehicle — a highly mobile four-seat EBLC—RAM – is unlocked for free at the 16th level and is equipped with a machine gun mounted on top, as well as an automatic main gun.

The trailer shows some new weapons for Battlefield 2042, including a PF51 at level 22, a hybrid pistol and submachine gun using a P90 magazine, and an Avancys light machine gun at level 34 designed for continuous fire. Also shown is the AM40, a compact assault rifle that opens at the 10th level, best suited for close combat. A new gadget, a stun grenade, opens at level 28 and incapacitates enemies with blinding light for a few seconds. On the cosmetic front, various special skins are shown, including camouflage suits with matching weapon skins, as well as a particularly brutal Blunt Force destruction, unlockable at level 20, involving a hammer and one unfortunate opponent.

The reaction to the trailer has been surprisingly positive, judging by the feedback from viewers on YouTube, which we hope is a good sign of the success of Battlefield 2042 next season. Since DICE intends to improve the game after its difficult launch, it is possible that Battlefield 2042 may return in the eyes of the first-person shooter scene.

The Studio Of The Creator Of Resident Evil Works On A...

Kirby’s Dream Buffet: How Jelly can be Used in Basic Games