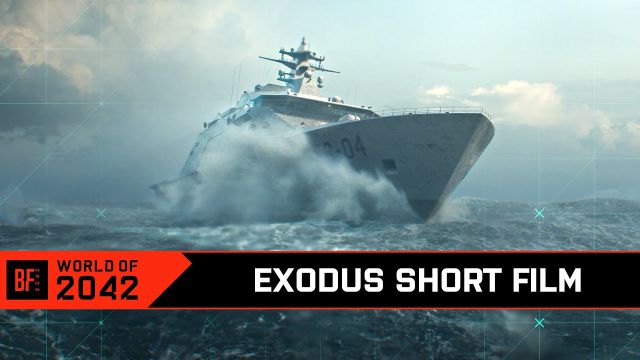 Battlefield 2042: Electronic Arts will explain the origins of the history of Battlefield 2042 through an official short that can be seen for free on YouTube. Battlefield 2042 will specify the origins of its history through an official short film this coming August 12 from 5:00 p.m. (CEST). Electronic Arts and EA DICE want players to be able to contextualize the events that will be narrated in the video game starting this October 22 with a short film called Exodus, a short cinematic introduction in which the creators will explain what has happened before from the title story. We can see it live through YouTube.

Although Battlefield 2042 will not have a campaign mode, that does not mean that the work will give up the fact of telling us a story with its own narrative structure. Each season will tell a story that continues the previous one. The official Battlefield channel (YouTube) is the platform chosen to see Exodus live starting this August 12; the short will last between 9 and 10 minutes.

Battlefield 2042, the largest installment in the EA DICE saga

Battlefield 2042 will go on sale on October 22 with the aim of establishing itself as the largest and most ambitious installment to date. Players on Xbox Series X | S, PlayStation 5 and PC will be able to play in games of up to 128 players, while on Xbox One and PS4 the maps and modes have been optimized to ensure a smooth experience; in return, the experience will be up to 64 players.

In case there are not a sufficient number of real users, the groups will be filled with bots. Modes such as Advancement and Conquest are back, the latter with multiple zones called sectors, and cross-platform play will be guaranteed. All this not to mention Battlefield Portal, a remastering of game modes from previous installments in the saga.

You can find out all the details of the open beta of the game here. Battlefield 2042 will be released on October 22 on PS4, PS5, Xbox One, Xbox Series X, Xbox Series S, and PC.

Suga shares one side of his life and love of music...