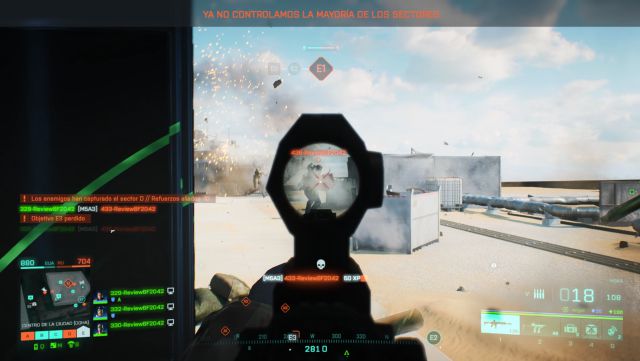 Battlefield 2042: We take a look at the final version of Battlefield 2042, the latest installment in the EA DICE franchise, coming November 19 to PS5, PS4, Xbox, and PC. Battlefield 2042 comes to the end of the journey. After a few months where it gradually shed its main pillars, the title of EA DICE has already allowed us to fight in its long-awaited final version. During our open beta impressions we said it: “Glimpses of a great delivery.” At times it is exceptional. When the pieces fit together, you feel like you’re in the franchise that stole so many hours from you in the last couple of decades. However, some shadows remain. Shadows that darken too much what we asked of a saga that required a great hit on the table.

Hazard Zone and Battlefield Portal keep a competitive multiplayer afloat that requires several decisions: balance, greater content and measure. Battlefield has always lived with chaos, a double-edged sword that allows for those unique moments, but mishandled can have the opposite effect. 2042 falls into uncontrolled chaos, especially in Advance. Sometimes because of the funnel effect; in others, due to the lack of impact of your performance in battle. It is difficult for a squad to make a difference, both in terms of the number of players and the size of the playable area.

Conquest and Advancement, how have they evolved in 2042?

To speak of Conquest mode is to speak of Battlefield in capital letters. Since Battlefield 1942 it has served as a battlefield for millions and millions of games. Within the community is the heart, a main ingredient for players who remain attached to the brand. The objective is simple: capture flags and hold them longer than the rival. That easy. Given the expansion of the maps and users per game, which amounts to 128 on PS5, Xbox Series X | S and PC (64 remain in the last generation), the team has made important decisions when addressing a departure.

The maps are now divided by sectors, thematic places that revolve around a point of interest, which depending on their size can house between one and three capture points. In practice they work as small independent maps where all the action converges. During the crossings between points, however, the combat is diluted. For a team to control a sector, it must take control of all the zones of influence within it.

The feelings are positive when the situation is favorable. For example, the Hourglass skyscraper area is bustling. Attacking or defending on the rooftops almost always maintains a very high pace, but it does not stay that way on the rest of the map. Sectors where only one capture point is found is almost always empty. The same scenario shows the opposite example. The town in the center of the map and the northern highway are barely moving. And when there is combat it is only at long distance, grass for snipers or some tank lost in the dunes.

MCU Fans Point to a Mysterious Hole in Korg’s Plot in...

Hongseok From The PENTAGON Receives Malicious Comments For Being Fired From...