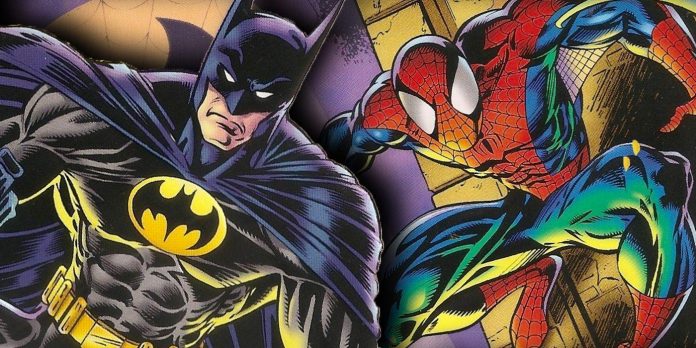 In the DC universe, Spider-Man seems to exist, at least in the eyes of the Dark Knight, as Batman once named and confirmed a “spider-man” named Peter, who certainly sounds like a Marvel hero. In “The Brave and the Bold” #74 from DC Comics, Batman travels through the night sky of Gotham City, demonstrating acrobatic moves and summoning someone who is described in the same way as a popular Marvel comics character.

While Spider-Man and Batman met in the popular Marvel and DC Comics crossovers, heroes from different universes actually starred in their own comic book adventures back in the mid-90s. In Spider-Man and Batman by J. M. DeMatteis, Mark Bagley, Scott Hanna, Mark Farmer, Electric Crayon and Richard Starkings, they teamed up and worked together to stop the Joker and Carnage. In this story, the spider-man and the Dark Knight shared mutual respect for each other, but this was not always the case. Batman once summoned Spider-Man, and in the process he confirmed that Peter Parker could also exist in the DC universe.

Related: Batman’s neglect of his persona “Bruce Wayne” can destroy him

In The Brave and the Bold #74 by Bob Haney, Ross Andru, Mike Esposito, Stan Starkman and George Kashdan from DC Comics, Batman teams up with Metal People to help solve a series of crimes involving other robots. The comic begins with Batman traveling through the darkness of Gotham City as he swings on his hook and lands on a flagpole. When he makes a 360 on a pole, the Dark Knight notes that he made this move “before anyone, including a certain Peter, who has been weaving a web recently.” Batman seemed to be evoking Marvel’s Spider-Man in his own comic book.

The scene certainly seems a bit strange, as Batman is talking to himself while swinging on a flagpole, but the random comments were probably DC Comics’ way of summoning Spider-Man. Perhaps the creative team harbored a grudge against the Marvel comics hero who moved around the city using items such as flagpoles to help, like Batman twenty-five-plus years ago? The web slinger debuted five years before the release of the issue of The Brave and the Bold, so the excavation would be timely.

Anyway, it’s a fun way to confirm that there is a “web spinner” named Peter in the DC universe. While all signs point to Batman referring to Marvel’s Spider-Man, also known as Peter Parker in the comic, he never mentions the web by his full name or the superhero’s name, which makes the moment a little more subtle. However, it’s hard to see the image and not immediately think that Batman is playfully condemning Spider-Man for copying his movements.

The Vampire Diaries: Two actors from the series who brought romance...