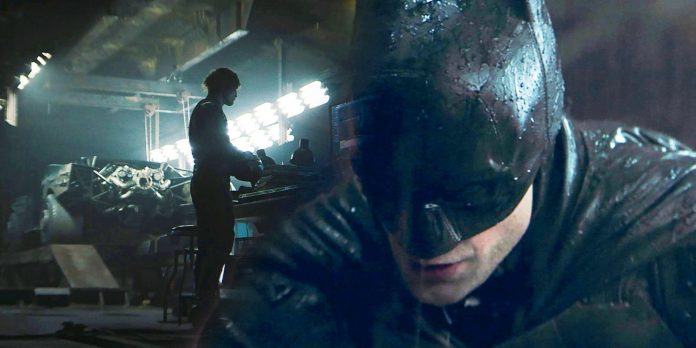 Batman production designer James Chinlund talks about what inspired Bruce Wayne to create a “Bat Cave” that uses an old subway station. The beloved comic book hero returned to screens earlier this year with director Matt Reeves at the helm, who offered a dark detective noir about a Caped Crusader. In Batman, Robert Pattinson starred as Bruce Wayne along with a star-studded ensemble that included Zoe Kravitz, Paul Dano, Colin Farrell, Jeffrey Wright and Andy Serkis.

Drawing inspiration from classic Batman comics such as Year One and The Long Halloween, Batman leaned to the other side of the Dark Knight and followed a younger Bruce Wayne than viewers had seen before. In the film, Batman adapted to his second year of fighting crime in Gotham by facing the terrifying serial killer Dano, the Riddler. While new elements have certainly been implemented to keep the Batman story fresh, a number of the most synonymous features of the classic Batman story have remained. This included his iconic Bat Cave, in which this time Pattinson’s Batman used an abandoned subway station as his base.

In a recent interview with The Wrap, Chinlund, who worked as a production designer in Batman, talked about how a new Batman Batpesher appeared. When asked about the decision to force Batman to turn an old underground railway station into his lair, the designer said that this idea came to them at the very beginning of work on the film. Chinlund shared how this ultimately affected the themes surrounding this new iteration of Batman. Check out Chinlund’s full quote below.

“It was at an early stage of development. And I think Matt and I were both excited about the idea of Bruce as an urban Batman, that he would be anchored in downtown and Wayne Tower. And so, following this line, trying to figure out what it’s going to be, as a New Yorker, I understand the underground of the city and how cramped this space is, full of sewer lines and power lines… I’ve heard this story about the Waldorf Astoria, there’s a train they keep under the Waldorf Astoria for the president so that in case of an emergency he can be taken out of town. I always thought it was such a romantic idea. They can have their own train station so they can come and go from Wayne Tower without running into a crowd on the street. bust and all that.”

The Bat Cave has become a major location in Batman’s story, appearing in various forms throughout the character’s cinematic history. Pattinson’s Bat Cave bears some similarities to other previous Bat caves, such as Christian Bale in the Dark Knight trilogy or Ben Affleck in DCEU. However, it is still unique in that it uses an abandoned station rather than the literal cave that is often depicted. The Bat Cave has been featured in the film several times, but with confirmation that Batman 2 is officially out, there’s certainly a chance it could become a more prominent place on screen in Pattinson Wayne’s story in the future.

Previous versions of the Bat Cave served as a kind of continuation of Wayne’s character and gave some insight into the mind of this introverted hero, and Batman’s Bat Cave is certainly no different. It’s interesting to hear what inspired Chinlund for this particular version of the iconic headquarters, and how its location was a deliberate departure from previous iterations typical of the Wayne family from this movie. Since it is likely that Batman has made significant progress between the Batman story and its upcoming sequel, it will certainly be interesting to see if the Batman continues to evolve and change along with its main character.