Home Entertainment Batman Beyond just turned out to be the perfect way to introduce... 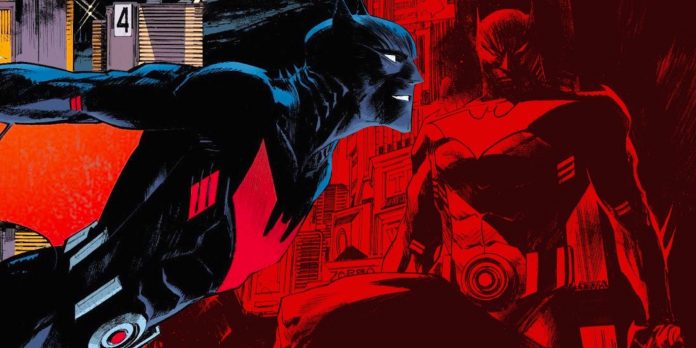 Warning! Spoilers Ahead for Batman: Beyond The White Knight #4

DC Comics’ latest Batman Beyond story shows how Terry McGinnis can be introduced to the DCEU without necessarily needing the original Dark Knight as a mentor. Sean Murphy’s “White Knight” universe, set in an alternate timeline of Batman and Gotham City, offers an exciting and dynamic story that effectively flips the script about Terry’s origin as the Batman of the future, in which he never had Bruce Wayne as his teacher.

In the first few issues of Sean Murphy’s new Batman: Beyond the White Knight series, Bruce Wayne’s identity becomes public after Batman voluntarily revealed himself and surrendered for crimes committed in this alternate universe, where the Gotham Counterterrorism Unit was formed. combined with GCPD, which is compromised by Batman’s former allies, who take full advantage of the Dark Knight’s discarded resources (especially his Batmobiles). However, Derek Powers took over the management of Wayne Tech in Bruce’s absence, restoring the experimental Beyond suit and hiring a young Terry McGinnis to wear it as his agent.

While Powers was one of the main enemies of Batman of the Future in the original cartoon, he became Terry’s mentor in this alternate timeline. Bruce Wayne’s Batman instead became Terry’s main antagonist after he escaped from prison to become the Dark Knight again, wanting to protect his legacy and prevent the dangerous prototype suit from harming Gotham. However, the new Beyond the White Knight #4 reveals that Terry has his own plans to avenge his father’s death. Combined with the new knowledge that Powers (aka Blythe) was involved in the murder and that he is building a huge army of Bat robots and Bat Tanks, it seems that Terry will soon change the situation and become the hero he always had to be. . So this new series shows the perfect way for DCEU to adapt Terry’s story in a dynamic and novel way that doesn’t copy and paste the cartoon (while relying less on the original Batman).

While it would certainly be interesting to see someone like Michael Keaton or Kevin Conroy play the older Bruce Wayne to reluctantly coach Terry, there’s something to be said for this concept introduced in “Beyond The White Knight.” Although Bruce Wayne is still involved in this new story, he is not as important to Terry’s heroic transformation. Instead, he began his journey as the Batman of the Future with all the wrong influences, being corrupted by Derek Powers. Finding the truth and uncovering Batman’s true legacy is more important to Terry’s arc than Batman himself.

In any case, the idea of adapting the DCEU version of Terry’s “Beyond The White Knight” is a really exciting concept. His desire to avenge his father’s death and his decision to pursue the guy who led him to the Beyond suit in the first place is very intriguing. However, it’s also a way to flip the script, relying less on the original Dark Knight. While the cult legacy would have to play a crucial role in any adaptation of Batman Beyond, the DCEU wouldn’t need to rely so heavily on having two versions of Batman in the same movie with this version. After all, they’re already doing it in the 2023 Flash.

The MCU Gives You More Daredevil Than You Could Ever Imagine