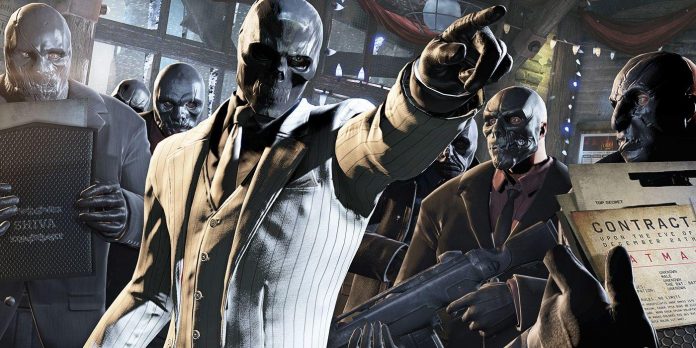 Batman: Arkham includes many villains, and Black Mask is the biggest joke among them. While Black Mask is among the main antagonists of Batman: Arkham Origins – and has lesser roles in Arkham City and Arkham Knight – it doesn’t make him a good villain, especially since his plans consistently fail. Whether it’s being beaten up by TYGER guards in Batman: Arkham City’s opening or having the spotlight stolen by Joker in Arkham Origins, Roman Sionis is constantly humiliated throughout the series of games.

Introduced as a Batman villain in 1985 by writer Doug Moench and artist Tom Mandrake, Black Mask is a sadistic crimelord infamous in Gotham for wearing a skull-like mask carved out of ebony. Born into Gotham’s high society, Roman Sionis grew to resent his parents and the city’s other socialites, and eventually developed an obsession with masks. He eventually took control of his father’s cosmetics business and used its resources to establish a criminal syndicate in Gotham, most notoriously coming to blows with Batman over the course of War Games, an arc where he tortured and seemingly killed the Spoiler, a Gotham vigilante who was also future Batgirl, Stephanie Brown. Black Mask’s fierce reputation has not been consistent in the comics or other interpretations, however, with the character also having been portrayed as an unskilled hothead relying on gimmicks to intimidate Gotham – a theme that continued in Batman: Arkham.

Black Mask is an iconic villain in the worst way. He isn’t known for his devious plots or for successful ventures in Gotham’s underworld. Instead, he’s known for his constant failures and basically being the punching bag of Batman: Arkham. His henchmen allegedly follow him out of respect, but money is a factor in their loyalty since he pays them better than other villains. Black Mask seems to think that money and a bit of sadism are enough to make him one of the big threats in Gotham’s underworld, but he falls short of garnering the level of respect, fear, and success that other Batman: Arkham villains have, leading to him getting an unceremonious send-off in DLC for Batman: Arkham Knight.

Black Mask isn’t a key villain in Batman: Arkham City, but is prevalent in the game’s environment. Sionis appears in the opening comically fending off a bunch of TYGER guards with a chair, before being tased and kicked repeatedly on the ground. He also appears in the game’s collectible Arkham City Stories, which reveal key details about many of the characters and the story leading up to Arkham Asylum’s sequel.

To Black Mask’s credit, Batman: Arkham City does reveal that he was the sole inmate to ever escape Hugo Strange’s super-prison. If players head to the rear of Joker’s steel mill (which was actually the Sionis Steel Mill before the Clown Prince moved in), they can spot a tunnel that’s been boarded up. Scanning it reveals the story of Black Mask’s escape and eventual recapture which led up to him being processed at the beginning of Batman: Arkham City’s story timeline. Still, this is little consolation for the villain, whose sole presence in Arkham City revolves around him having his hideout stolen and being mercilessly beaten up by a punch of mercenaries.

Although Black Mask was positioned as the main villain, Batman: Arkham Origins was yet another Joker story. The game’s premise – at first – seems to revolve around Black Mask hiring eight assassins to murder Batman, who has been disrupting his criminal activities. However, early on in the story it is revealed that the real Black Mask has been held hostage by the Joker, and that the Clown Prince of Crime had assumed his identity. Black Mask is eventually rescued by Batman, before escaping and being recaptured all over again. This added further insult to injury given what happened between Batman: Arkham Asylum and Arkham City, with Sionis being treated as a loudmouth who’s easily dealt with by both the Dark Knight and the Joker.

Black Mask doesn’t look any better as a villain in Arkham Origins Blackgate, the handheld spinoff that takes place shortly after the events of Arkham Origins’ Cold, Cold Heart DLC. Black Mask planned to overload the generators, but Batman stabilizes them before he succeeds. Then, his backup plan also fails because Catwoman doesn’t care about rigging explosives for him. In the end, not having accomplished anything, Black Mask gets caught up in a generator explosion and is consumed by fire, but manages to live and escape the police.

It’s clear that Black Mask is not among Batman: Arkham’s best villains like Joker and Scarecrow. None of his appearances include Black Mask succeeding in his underworld endeavors. Instead, he continues to be beaten up by Batman, Robin, and even other Gotham-based crooks. This theme continued in Batman: Arkham Knight, which brought Roman Sionis back as a means of showing what happened to Jason Todd following the game’s ending.

Black Mask shows up for the final time in the Red Hood DLC for Batman: Arkham Knight. Black Mask has what is supposed to be an arms deal with Penguin’s men, but Red Hood shows up, takes out Black Mask’s thugs, and gets his location from one of them before killing Sionis. Unlike Batman, Red Hood doesn’t have qualms with killing, so Black Mask won’t be seeing those henchmen again.

Much like his accomplishments as a villain, Black Mask’s death at the hands of Red Hood is insignificant and forgettable – he’s been little more than a punching bag throughout the series. Though he tries to fight Red Hood in Batman: Arkham, Black Mask loses, and he ends up begging Red Hood to spare him, saying that he’ll leave Gotham and never return. Red Hood is, of course, not interested in Black Mask’s pleas. As far as methods of dying go, Black Mask’s death is rather mundane, with Jason kicking him out of a window, leading him to fall to his death.

Batman: Arkham games have a dark tone, but Black Mask lightens it a bit considering he’s difficult to take seriously. Although occasionally depicted as a fearsome adversary in the comics, Batman: Arkham’s version of Sionis was defined by his constant failure. He’s unable to pose much of a threat to either Batman or his adversaries, and was disposable enough that his fate was resolved in a minor story DLC in Batman: Arkham Knight. Sionis may have his admirers, but it’s safe to say that Batman: Arkham wasn’t one of them.