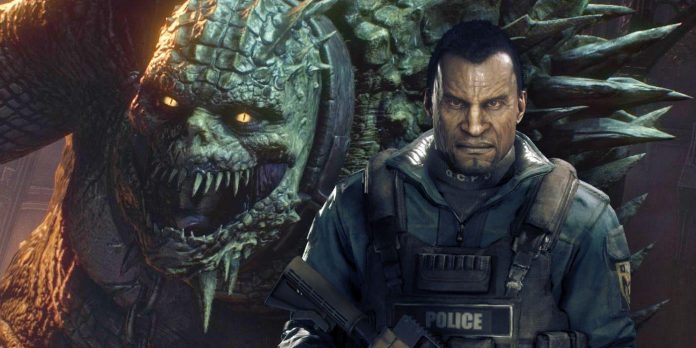 In the Batman: Arkham series, there are several such heated feuds as between Aaron Cash and Killer Croc. A former Arkham Asylum guard turned Gotham City policeman harbors deep fear and hostility towards Batman’s opponent, the reptile, even when the Caped Crusader first meets him in Batman: Arkham Asylum. Although the two appear in almost every game in the series, the story of their rivalry goes back to the past before Arkham Asylum happened, and speaks to how honest a character Aaron Cash really is.

Batman highly appreciates Aaron Cash in the series “Batman: Arkham”, because Cash’s psychological profile reads: “Aaron Cash is a Gothamite through and through, he has worked in city law enforcement and security services all his working life […]He is a trusted friend of both Batman and Commissioner Gordon.” Throughout the story of Batman: Arkham Asylum, Cash demonstrates his duty-oriented nature by offering his help to the Caped Crusader, despite the danger he is exposed to, especially as a disabled person who has lost his left arm. However, Cash still occasionally shows his dark side by discussing Croc’s Killer, and even suggests that he kept him in solitary confinement and rarely fed him while working at Arkham Asylum.

By topic: How Batman: The founder of Arkham Asylum turned out to be the second prisoner

However, Batman and the players can understand Cash’s hatred of Killer Croc by learning about the origin of their enmity. In the Road to Arkham comic, which takes place before the events of Batman: Arkham Asylum, it turns out that Killer Croc was the one who took Cash’s hand, eating it during a previous escape attempt — as was the case with mainstream DC. . So Cash has every reason to despise the reptilian enemy, but Killer Croc also taunts Cash whenever he gets a chance, suggesting he’d like to eat the rest of it. However, in the plot and chronology of Batman: Arkham, Cash not only takes revenge on the Killer Croc, but also outgrows his hatred and learns to empathize with him.

How Batman: Arkham Knight Resolves the Feud between Cash and Killer Croc

Cash takes revenge on Killer Croc several times throughout the Batman: Arkham series, both directly and indirectly. At first, he helps Batman in the Arkham Asylum to find the lair of the Killer Croc, where the Caped Crusader wanted to find only plant spores, but in the process beat the mutant and ignited his anger. Between Batman: Arkham City and Arkham Knight, Cash even directly assisted Batman by distracting Killer Croc so Batman could freeze him. But Cash really saw justice in Batman: Arkham Knight when it was revealed that Killer Croc had lost his left arm during the experiments of Warden Ranken. To prove Ranken’s crimes, Batman returned the arrested Killer Croc and his severed limb to the Gotham City Police Department, where Cash served as interim leader.

However, instead of reveling in the bliss of revenge, Cash revealed the true nature of his character and confesses to Batman that he feels sorry for the Killer Croc for experimenting on him. Despite his hatred of the beast, Cash can’t help but empathize with a man who, like him, has lost a limb. This suggests that next to the Dark Knight is another respected and beloved hero in the Batman: Arkham series: Aaron Cash.