Home Entertainment Batman: 10 Memes that perfectly reflect the Penguin as a character 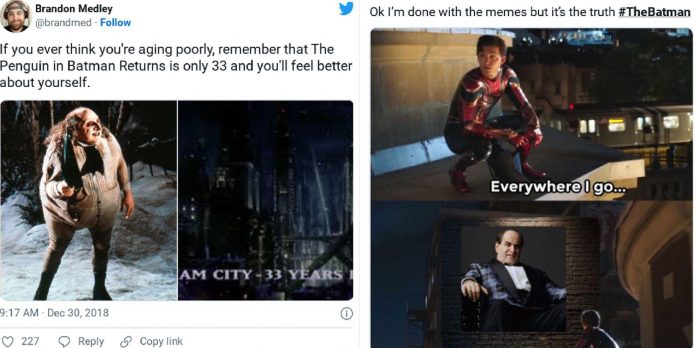 The Penguin (as played by Colin Farrell) recently appeared in Matt Reeves’ The Batman, where although he wasn’t the primary villain, he was a delightful mix of the bizarre and brutish that fans have come to love.  Often depicted as a mob boss with a penchant for penguins, Oswald Cobblepot has been a supervillain in DC Comics since the early ’40s, and in recent decades has become the subject of many memes.

While he might not be as intimidating as Killer Croc or as diabolical as the Joker, he’s struck fear into the hearts of Gotham’s citizens and made an enemy of the Caped Crusader.

Don’t let Penguin’s urbane outward appearance or small stature deceive, though he isn’t as massive as Bane or Killer Croc, he can rise to heights of power much higher than them. Throughout the comics, he’s far more interested in building a criminal empire than making Gotham City his personal playground.

And unlike Joker, Penguin is one of the only members of Batman’s Rogue Gallery who isn’t insane. Despite being disfigured (sometimes wildly depending on the artist’s interpretation), he makes up for it with an aura of sophistication and an understanding of how things operate in bureaucratic circles.

He Has A Long History

Danny DeVito is co-writing a Penguin comic for the villains 80th anniversary. His work will be available in Gotham City Villains Anniversary #1, a mega issue DC Comics is publishing this November. https://t.co/9Mf5HDCBwH pic.twitter.com/fAqCcVJamH

Penguin celebrated the 80th Anniversary of his first appearance in DC Comics in 2021, a momentous occasion capped off by Danny DeVito announcing that he would write a Penguin story himself as his own contribution to the storied history of the supervillain he portrayed in Batman Returns. It was included in Gotham City Villains Anniversary Giant No. 1 in December of that year and featured a wild plot where The Cat and The Bird fall in love.

Danny DeVito is considered one of the best Penguin actors to many fans thanks to his humorous, disgusting, and oddly touching portrayal of Oswald. He revealed his origins as a lonely orphan, cast aside because of the deformities that made him resemble a literal penguin, who teams up with Catwoman to take on Batman. It’s no wonder he wanted Penguin to have his own love story.

Despite how rotund he can look in certain comics, Penguin is no slouch when it comes to hand-to-hand combat, though he doesn’t often choose to exercise this skill on Batman. He’s notorious in Gotham City for being a ruthless crimelord who uses minions to do his dirty work anyway.

Like any efficient mobster, he always has several lower-level lieutenants standing between him and the Dark Knight, but when cornered even penguins have been known to lash out at an enemy.

Depending on which version of Penguin appears in the comics, he either has an incredibly large fortune or has lost everything. He’s sometimes depicted as one of the richest men in Gotham City, with the Court of Owls often seeking to retain his membership.

Penguin also has one of the biggest armies of any supervillain actively working to take down The Bat, and even though it was amusing to watch Danny DeVito’s version strap rockets to penguins in Batman Returns, he had the money to waste.

By having so many layers of insulation against the Gotham PD through his mob rings and influence, Penguin is rarely proven to be the one behind nefarious machinations in Gotham. In The Batman, it’s difficult for Gordon or Batman to pin anything substantial on him, despite his crimes being obvious to fans.

With the DA being paid to let certain cases go unprosecuted, and with nothing but Gordon’s word, all Penguin has to do is put money in the right pocket. With his repulsive demeanor and smarmy bravado, Farrell is the best Penguin yet to some fans. Looking at him, the wheels in his mind always seem to be turning about how he can do something despicable and get away with it.

He Knows The Strength Of Minions

There have been several alternate versions of Penguin in the comics, and Gotham represented a more psychoticl, emotionally volatile, youthful Penguin than fans had seen in a live-action adaptation. Played by Robin Lord Taylor as the assistant to crime boss Fish Mooney, he had big plans for his own rise in Gotham City.

While he might not have had many “friends” this Oswald did grow very close to Edward Nigma, aka The Riddler, played by Cory Michael Smith. Where minions are better than friends, however, a partner in crime becomes better than anything he could have hoped for, and the two unleash chaos on an unsuspecting Gotham City by the final season.

Each New Penguin Leaves His Own Mark

Since the ’60s, there have been several versions of Penguin in movies and TV, beginning with Burgess Meredith who appeared in the 1966 Batman film and its subsequent television series starring Adam West as Batman. Where his Penguin was an evil version of Rich Uncle Pennybags, Danny DeVito’s was a scarred outcast, Robin Lord Taylor’s was a dark sociopath, and Colin Farrell’s in the current standing is somewhat of an amalgamation of them all.

In the comics, he’s been a real threat when he’s served on the Suicide Squad, been made King of Blackgate Prison, become mayor of Gotham City, and turned into a giant crow, but most of the live-action interpretations don’t make him as dangerous as he could be.

Ok I’m done with the memes but it’s the truth #TheBatman pic.twitter.com/ybhv4vCMk0

Penguin is having a moment thanks to Farrell’s transformative performance in The Batman. This meme lampoons his ubiquitousness with a nod to Peter Parker’s inability to get away from posters of fallen Avenger Iron Man/Tony Stark.

Fans are already excited about the Penguin spin-off coming to HBO Max, part of a larger television universe that will tie into Reeves’ continued Batman cinematic universe. Farrell will reprise his role, adding legitimacy to a figure whose entire character revolves around conveying it.

If you ever think you’re aging poorly, remember that The Penguin in Batman Returns is only 33 and you’ll feel better about yourself. pic.twitter.com/nxSXl9idVl

Most interpretations of Penguin find him on the corpulent side, and even Robin Lord Taylor added pounds to his presence in order to more accurately portray the iconic comic book version of the character. Something had to be done in order to maintain continuity, and give a nod to DeVito’s physique.

To be fair, despite his being only 33 years old, his version of Oswald lived in the sewers of Gotham City. Aside from the disadvantages afforded him by his birth, the ridicule he suffered when he was young made him bitter and resentful, and likely aged him.

Penguin might not have the same sort of enigmatic backstory as Mr. Freeze or as well known a rivalry with Batman as Joker, but he manages to enthrall the Caped Crusader simply because so many aspects of him are realistically unsettling. He is the natural result of capitalism, both at its lowest point and at its highest peak, and he can be unpredictable.

In The Batman, he holds a lot of cards, and can easily have Bruce Wayne beaten up by bouncers at the Iceberg Lounge. Later on, the tables are turned, and he barely escapes with his life from Batman. But like something that crawled up from the sewer, he knows how to survive, and will probably outlast flashier villains if he’s patient.

Fantasian – Part 2 Now Has A Release Date On Apple...