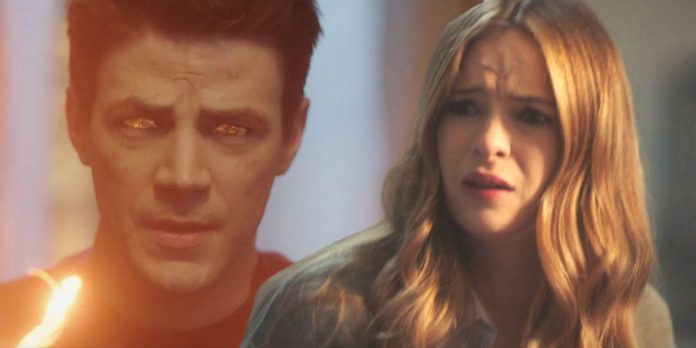 Attention! The following contains SPOILERS for the 8th season of The Flash, the 16th series. Barry Allen did a bad thing when he destroyed Caitlin Snow’s lab in the final scene of Season 8 of The Flash, episode “The Mysterious Story of Bartholomew Allen”.

While Barry may have been right to be concerned about his friend’s actions, his reaction went too far and served only to exacerbate the underlying problems that prompted Caitlin to act behind his back.Now it seems inevitable that Caitlin will plunge into darkness, and Barry will now take some responsibility for it.

The growing tension between Caitlin and Barry was part of the backstory of season 8 of The Flash. When Caitlin felt there was a chance that her husband Ronnie Raymond might have survived the singularity that nearly destroyed Central City in season 2 of The Flash, and returned confused. As a cold fusion killer, Barry robbed her of the opportunity to try to save her husband’s life. The fact that it was later proven that Barry was right in his skepticism, and that Caitlin’s actions led to the creation of the entropic avatar Deathstorm, did not negate his hypocrisy when he refused to help Caitlin in her efforts. Barry took more drastic action in an attempt to protect his wife Iris, and Caitlin called him out about it, noting that she and the Flash Team “have joined the queue for you and Iris more than once.”

Related: The best episode of the 8th season of the series “Flash” reveals the fatal flaw of the Arrowverse

Barry’s earlier refusal to help Caitlin and her guilt over her role in creating the Deadly Storm pushed her to take decisive steps after Frost’s death. After her sister’s funeral, Caitlin turned their apartment into a laboratory and turned to Frost’s boyfriend Chillblane for help in obtaining the materials she needed to reproduce the experiments that turned Frost from Caitlin’s severed personality into a flesh-and-blood woman with her own body. Barry discovered what Caitlin was up to and reacted furiously, releasing lightning from his body in a controlled explosion that destroyed Caitlin’s lab even as she cried and begged him to stop. It seemed too much, considering that his abilities would have allowed him to dismantle Caitlin’s lab in a matter of seconds just as efficiently and much safer.

Barry’s extreme reaction makes sense in the context of the Flashpoint version of the Arrowverse and Caitlin’s choice of words justifying her actions. Trying to explain herself, Caitlin asked Barry if he could honestly say that he would not use his scientific knowledge to bring back a deceased loved one if his father or mother could be saved. Caitlin seems to have forgotten that Barry actually tried to use his powers to save his parents, and in the process nearly destroyed their timeline, which is doubly strange considering that creating her Frost image was one of the side effects generated by the reality of the Flashpoint. . However, it still seems strangely out of character for Barry to react so abruptly, instead of trying to reason with an offended friend.

Unfortunately, there is little drama in the question of whether Caitlin will save her sister, since it has already been spoiled that Frost will not resurrect. The more important question at the moment is whether Caitlin will be able to completely break down after being thwarted twice by Barry Allen. Danielle Panabaker hasn’t signed up for season 9 of The Flash yet, but it could be an interesting twist if Barry’s actions force her to become a villain next year, possibly assuming the identity of Frost’s Killer, which she has long denied.

Instagram Blocked Florence Pugh For Talking About Her Return In Hawkeye