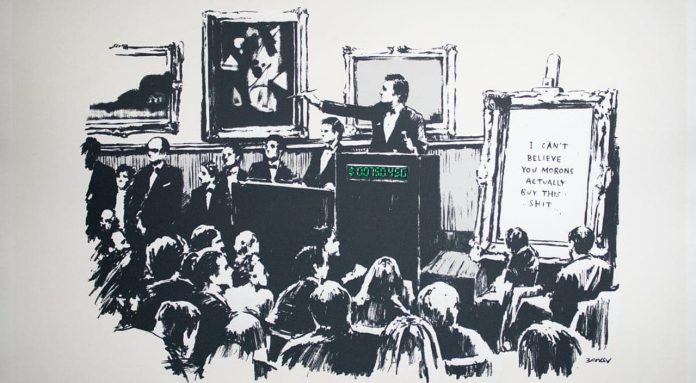 A blockchain company bought and burned an art work signed by street artist Banksy for $ 95,000 and posted the footage on Twitter. The painting “Morons” fell into ashes in a matter of seconds. It was immediately transformed from a physical entity into an unconvertible coin (NFT).

Known for his striking murals in dozens of countries, especially England, Banksy is known for his anarchist identity and political activist projects. The artist has been giving remarkable messages with his anti-capitalist and minority rights works he has drawn on countless walls in different corners of the world for years. But this time it was not himself who gave the message, but a picture he made years ago. That famous painting is now spoken of as one of the most interesting examples of modern art.

They bought and burned the Banksy painting

Injective Protocol, the blockchain company paid $ 95,000 to a gallery in New York in 2006 and bought Banksy’s work Morons. Members of the same firm recently burned this picture in front of thousands of people during a live broadcast on their Twitter account called BurntBanksy. Although the reason for this was not understood at the beginning, it was soon clarified the reason for this action.

Even before the surprise of the audience watching the live broadcast, company employees created a digital representation of the work using blockchain technology. Using the OpenSea blockchain network, it turned into a piece of art NFT. This unexpected move quickly divided social media. Some would consider this as “modern art”. Others regretted the physical disappearance of an original Banksy work.

Mirza Uddin, director of Injective Protocol, described this event as “the first great example of how a physical work of art turned into an unprecedented being.” He stated that they specially selected a work by Banksy for this initiative. He cited an example of the artist breaking down his own work in an auction in recent years. She also mentioned the non-exchangeable and non-exchangeable nature of the non-Fungible Token (NFT) cryptocurrency method. He added that this way, the work will live forever and will never be out of date.

How do you evaluate this event? Is the transformation of the painting into a digital asset a modern art initiative or a disrespect for the work? You can share your ideas with us.

Coronavirus can remain active in the body for long periods