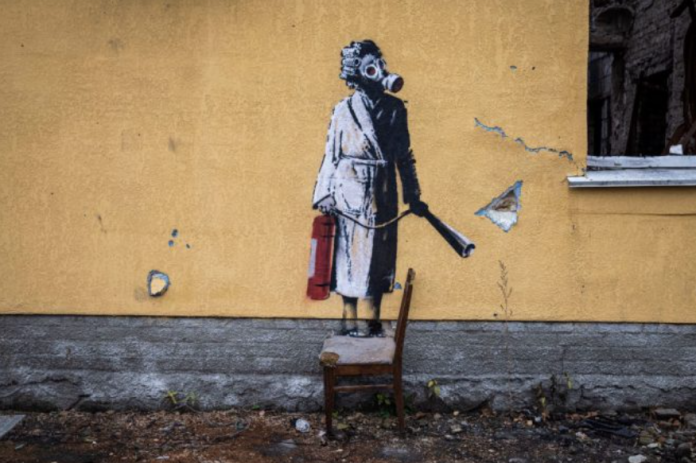 Banksy shared a touching behind—the-scenes video documenting the creation of his recent works in Gorenka, Ukraine – see below.

An anonymous Bristol artist confirmed last week that he is behind seven new works that have recently appeared in the war-torn country. One of the places was Borodyanka, a city northwest of Kiev.

The works were noticed in Kiev itself, as well as in its suburb of Irpen.

One showed two children using a metal tank trap as a swing, and the other showed a woman in curlers and a gas mask holding a fire extinguisher. According to HypeArt, the third part depicted a Vladimir Putin lookalike who was thrown to the floor during a judo match with a child.

Yesterday (November 17), Banksy posted a one—and-a—half-minute clip on Instagram in which he sees him at work in Gorenka – a small village on the northwestern outskirts of Kiev – this month.

The video, voiced by a Ukrainian folk song, is interspersed with shots in which a mysterious artist paints with spray and stencil, frames of finished works on various damaged buildings.

In addition, the clip includes a brief interview with an unidentified mother in front of a destroyed school.

“There was a bomb here and a lot of people died,” she explains, before comforting her child who was attending school. “Don’t be sad, honey,” she adds. “We have already cried so much, we have no tears left.”

You can watch the full video above.

Khorenko faced particularly brutal attacks from Russia earlier this year. Borodyanka was also severely affected by shelling in the first days of the conflict, which began in February. The last city was liberated from the Russian occupation back in April.

Earlier this year, Banksy was awarded the title of Honorary Professor of the University of Creative Arts in recognition of “his humanitarian efforts and the impact he has had on the world art scene.”

However, he did not attend the award ceremony to preserve his anonymity.

Outlander: The reason Caitriona Balfe had such a hard time filming...