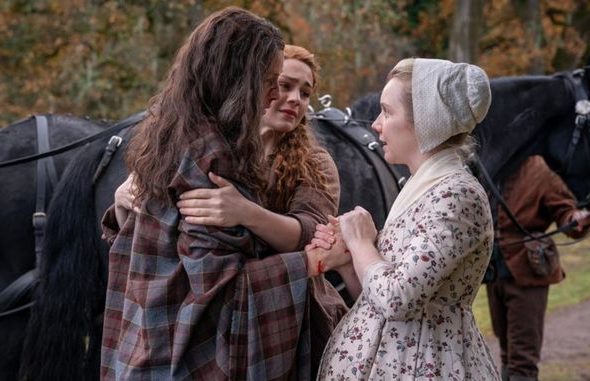 Outlander season six will no doubt see Claire Fraser grow more protective of her daughter Brianna Fraser and Marsali Fraser as the Revolutionary War draws closer, the trio will grow closer in the new series, a story for which, according to reportedly, Caitriona Balfe fought.

Marsali (Lauren Lyle) became something of a surrogate daughter for Claire Fraser (Caitriona Balfe) due to her marriage to Fergus (Cesar Tomboy). Recall that Claire had left her own daughter behind when she traveled back in time to the 18th century to reunite with Jamie Fraser (Sam Heughan) in the third season of Outlander.

When Brianna Fraser (Sophie Skelton) followed her mother through the stones at Craig Na Dun to warn her that she had found Fraser’s obituary, fans may have expected the redhead to bump into Marsali. Instead, they have formed a brotherly bond, which the Claire Fraser actress was in favor of.

So, it would have been easy to see Marsali, who has been training as a surgery apprentice with Claire as her mentor, take on Brianna. However, women have formed a strong bond as young mothers who simply want the best for their family in difficult times.

In turn, speaking about the close bond that Marsali and Brianna share, actress Sophie Skelton revealed that it was Caitriona Balfe who was adamant that they did not fight each other.

For her part, Sophie noted that her bond was evident when Marsali and Brianna welcomed Claire to Ridge after she was attacked in the Outlander season five finale.

“That’s one thing I know Caitriona really fought for was to make sure the women weren’t fighting each other, Marsali and Brianna weren’t fighting for Claire’s attention or anything like that,” Skelton explained.

“She knows Marsali has been there for Claire, Brianna doesn’t like blood so she hasn’t been helping with surgery and none of that so she loves that her mother has an apprentice to do that with plus she’s very grateful to Marsali for that, “she added.

It is not known exactly what awaits the Frasers when the sixth season of the Starz series finally hits screens, but fans are already aware of what to expect in the Revolutionary War.

This will undoubtedly cause problems for the family, as much of the fighting took place in North Carolina. Could the Frasers and MacKenzies split between the fights and be forced to spend time apart? The truth is that fans should wait for Outlander season 6 to arrive to know the outcome.

NCT 127 celebrates the first win of ‘Kick it’ with Baekhyun