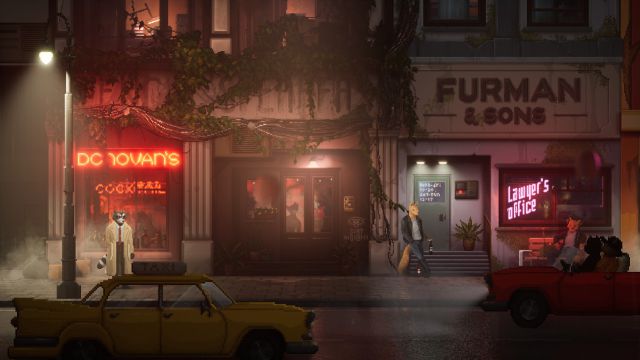 Backbone: We analyze Backbone, a curious detective adventure starring anthropomorphic animals, which boasts a spectacular graphic finish and a majestic setting in a peculiar dystopian world. One of the most attractive titles a priori that the increasingly thriving independent sector of the video game world had to offer us is this Backbone that we are dealing with today. Its post noir setting in a dystopian world populated by anthropomorphic animals, along with its magnificent visuals that truly lives up to the epitome of pixel art, gave us the highest hopes for what it would finally offer us. Unfortunately, the end result is far from what we expected to find. At first, its developers touted it as a modern twist on the classic adventure game system. And the truth is that in its first bars it does offer an interesting proposal in this sense, but once the first third of the adventure is over, it fades and does not end up knowing very well what it wants to be, limiting itself to offering us a series of dialogues so that we choose without much more to contribute at the playable level, becoming almost a visual novel.

The story, which is very interesting in those initial bars, does keep the type and manages to trap us with a series of very surprising events and attractive characters. But again the game fails to end abruptly and without showing us everything that is limited to outlining, offering a story that is more like a prologue to an interesting universe and with good wickers that leaves the player dissatisfied with how the title closes in its final bars.

EggNut, the developer behind the title, was formed in 2017, and is made up of members from locations as diverse as Canada, Russia, North America or the Netherlands, so all the work of creating the video game has been done remotely. And the truth is that the final feeling that his work transmits is that most of the team’s effort has been put into the superb visual and artistic section of the game, a section in which it does shine in style. We finally have a very simple title, which loses a lot of strength in its second half, recommended for those who want to live an adventure without many complications in an attractive dystopian world that boasts a great setting and staging. The title is currently available on PC on all the usual download platforms, and a version will be released for all consoles available on the market in a few months.

The title takes place in a dystopian city inspired by Vancouver, with the peculiarity of being populated by animals of various races of anthropomorphic forms and that behave like humans, in a similar way to the famous Blacksad comic (with which it bears many similarities.) . Our protagonist will be Howard Lotor, a small-time detective with strong convictions who subsists on just enough by leading a solitary life. At the beginning of the adventure, a woman asks him to follow her husband and discover the causes of the erratic and problematic behavior that he is having lately. What at first seemed just another case within the detective’s routine, ends up being complicated with brutal revelations that will lead him to face the most powerful crime boss in the city and even with the very high spheres that rule from the shadows. the designs of this curious universe.

Star Wars: Cassian Andor – series will return to the universe...