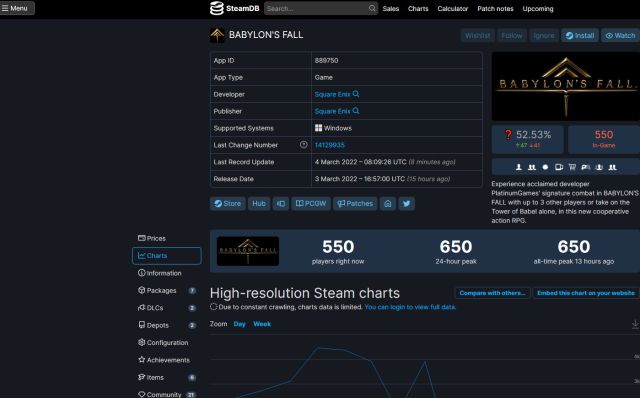 Babylon’s Fall: The new Platinum Games production has been produced by Square Enix and has not reaped good numbers in its debut. After years of development, Babylon’s Fall is now available on PlayStation 4, PlayStation 5 and PC. It is developed by the creators of Bayonetta 3 and NieR: Automata, Platinum Games, who have witnessed a very unflattering Steam premiere. This online title produced by Square Enix has reaped a peak of concurrent players of just 650 users (SteamDB), a pyrrhic figure far removed from the numbers of other company video games.

As reported by VGC, Marvel’s Avengers had 28,000 concurrent players at its launch, a figure that plummeted as the weeks went by. From Square Enix they recognized that the product had not met expectations, although the Crystal Dynamics studio has continued to develop content. On the other hand, another of the online titles from the publisher of Final Fantasy and Tomb Raider, Outriders, began its journey with 125,000 concurrent players.

The first season of Babylon’s Fall, The Eternal Ziggurat, features a timed event inspired by NieR: Automata, content overseen by Yoko Taro and Takahisa Taura, director and game designer, respectively. In addition to the 2B, 9S and A2 skins, players will be able to enjoy exclusive rewards and special missions, among other new features.

Platinum Games continues to work on Bayonetta 3 and Project G.G. Meanwhile, the director of the latter, Hideki Kamiya, has revealed that he is seriously interested in resurrecting Scalebound, a game that was going to be released exclusively for Xbox One, but that Microsoft decided to cancel. Kamiya would like to speak with Phil Spencer, head of the Redmond video game department, to seek a meeting point on the possible continuity of the IP.

Babylon’s Fall can be played on PS4, PS5 and PC. You can find out all the details of its launch, the editions and the price in this article.

Back 4 Blood, Visage And Destiny 2: Beyond Light Among The...